The idea of a real world open educational resources (OER) activity has long been on the agenda of CC China Mainland volunteers. As one of the CC global community’s OER advocates, CC China Mainland has in the past put more effort into promoting the use of CC licenses in OER instead of co-hosting multi-party activities in remote China. This past summer, however, CC China Mainland co-organized a real world OER activity in rural China which taught us how powerful collaboration across organizations could be.

Where did it happen?

Because of the inconvenient transportation, there are very limited educational materials available for primary and middle school students from the island. In addition, many of the students’ parents work in big cities to make a living. These “left behind” children have to stay with their grandparents for most of their childhood. However, they have the same dreams like kids in urban cities.

Who made it happen?

After initial communications, CC China Mainland decided to turn the Luxi project into the first OER summer camp by inviting some OER providers to join the lessons. Guokr.com responded to CC’s initiative first based on past cooperation.

How did it happen? 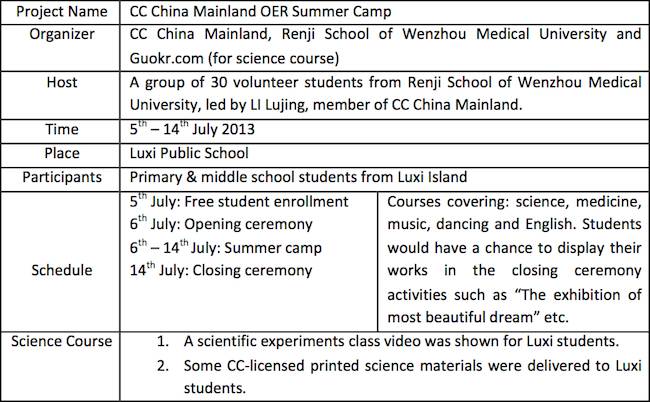 What did the partners think?

Here is some feedback both from Guokr.com and Renji School.

Guokr.com (the most popular online platform for science and knowledge sharing in China) contacted a couple of active users who used to put their own video lessons online. All of them were very interested in helping but none could make the travel because of time or distance. Based in Beijing, with members all around the country, Guokr thought that it would be difficult to send members to Luxi Island, due to both finance and timing.

But it turned out that distance doesn’t matter.

At this point, Guokr.com’s MOOC initiative inspired us. Guokr has been dedicated to popularizing MOOCs and its MOOCs online community has become the largest in China. We decided to support the program by designing a MOOC.

Deyi is a student majoring in agricultural science who happened to run a Guokr-sponsored project named “box of making plant specimens – a teaching guide.” The box contains materials for producing plant specimens as well as teaching guidance. To facilitate teaching, Deyi recorded 4 videos to show viewers how to use the box. A quiz is displayed in the middle of the videos as well.

Before the formal classes, Deyi delivered 4 boxes to the school and contacted a local volunteer as the teaching assistant. He trained the volunteer on how to play the videos and guide students to use the box.

That’s how a MOOC-like class goes into a school on a small island and that’s how a class happens without the teacher standing in the front of a classroom.

The content below is provided by Renli School of Wenzhou University.

Every summer, 30 volunteer students go to Luxi Island to give some courses to Luxi Children. The free teaching activity has lasted for 6 years and is warmly welcomed by the parents of the island, because most of the children were “left behind” and needed to be cared for.

Last year, a kid told us his dream of being a scientist. At that time, we realized that they want more than what the island can offer. But most of the volunteers are medical students, lacking the professional knowledge of other fields. At that time, we thought about cooperation. CC was our first choice and with their help, we got connected with Guokr.com.

In the local classroom, one of our volunteer students played the role of teaching assistant to guide the children to learn better, because the children were too young to understand the video alone. After the class, every student got to focus on their own work. They were really happy to be involved and asked us to bring more courses next year.

In addition to the OER Summer Camp, CC China Mainland has run engineering and design challenge workshops incorporating open source and CC licensing education for university students in China. Called the eXtreme Learning Process (XLP) at Tsinghua University in collaboration with Toyhouse, it is also a School of Open project and was highlighted in the Wall Street Journal last year.

About the School of Open

The School of Open is a global community of volunteers focused on providing free education opportunities on the meaning, application, and impact of “openness” in the digital age and its benefit to creative endeavors, education, research, and more. Volunteers develop and run online courses, offline workshops, and real world training programs on topics such as Creative Commons licenses, open educational resources, and sharing creative works. The School of Open is coordinated by Creative Commons and P2PU, a peer learning community and platform for developing and running free online courses.

One thought on “OER Summer Camp on Luxi Island”