This is part four of a five week series on the Affiliate Team project grants. So far, you’ve heard from our affiliates in Africa, Arab World, and Asia-Pacific. Today, we’re featuring our Europe projects, including a revived CC WordPress plugin from Finland, an awareness raising event in Dublin, Ireland, and a course for librarians and academics led by CC Romania.

CC Finland is working on a revived Creative Commons WordPress plugin, building upon the existing official plugin built by Nathan Yergler, former CC CTO.
The renewed plugin will work in multi-author blogs with varying license needs, which displays correct author information on all pages in the license RDF, and which is localized to several languages. As an additional feature, integration with online CC-licensed image banks for searching and using figures in blog posts would be extremely useful in helping bloggers use pictures legally.
As WordPress is the most used CMS in the world, it should have robust Creative Commons functionality, officially produced by CC. The plugin would both make it easy for bloggers to share their content openly, and would educate many about CC licenses.
On February 19th, we announced an alpha version of the renewed WpLicense plugin. Download it here: https://github.com/tarmot/wp-cc-plugin/releases/tag/release-2.0-alpha
We welcome any bug reports, issues or general feedback on WPLicense on the cc-devel mailing list or as issues in Github.

Creative Commons Ireland held an awareness-raising event in Dublin on “Maximising Digital Creativity, Sharing and Innovation” in January 2014. The event took place in the National Gallery of Ireland and was attended by 100 people working in technology, libraries, academia, galleries/libraries/museums, media and education. The speakers represented a cross-section of perspectives, and the event was an opportunity for CC Ireland to develop relationships with organisations such as the Open Knowledge Foundation, Digital Rights Ireland, and Ireland’s Copyright Review Committee. Eoin O’Dell of the Law School, Trinity College Dublin talked about copyright law reform and its impact on Creative Commons licences. The Copyright Review Committee, which was chaired by Dr O’Dell, published its proposals for change in Ireland in October 2013 (see http://www.djei.ie/press/2013/20131029.htm). O’Dell said his committee’s report had provided the first legal definition of metadata, which particularly aimed to protect the rights of digital photographers. The report also proposed that parody and linking should be allowed without any infringement of copyright, as well as a nine-point ‘fair use’ doctrine. Kristina Alexanderson of CC Sweden spoke about how she uses CC licences in her work and her work has been accessed by very large audiences as a result. 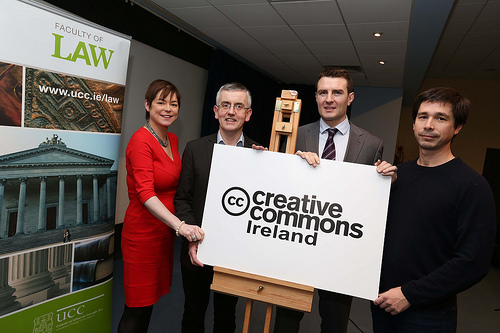 Alek Tarkowski, European Policy Advisor, CC, discussed open policies for user rights and freedoms, and highlighted a Polish project for providing open education textbooks. Gwen Franck, CC Regional Co-ordinator, highlighted the work of CC Affiliates throughout Europe. Professor David Post, of Temple Law School, Philadelphia, USA said there were between 400 million and 800 million Creative Commons licences in use today, and Creative Commons represented people “taking the law into their own hands.” He said copyright law had “run amok,” with copyright protection running for too long and being too wide. The event was chaired by Darius Whelan and Louise Crowley of CC Ireland and the Faculty of Law, University College Cork. Photos, videos and slides are available at www.creativecommonsireland.org.

Many librarians and academics in Romania are not aware of or knowledgeable about open educational resources (OER) and how they can best leverage them for their needs. CC Romania, along with the Association for Technology and Internet (ApTI), the National Association of Public Libraries and Librarians in Romania, and Kosson and Soros Foundation Romania teamed up to put on a series of workshops to raise awareness among librarians and academics on the topics of open educational resources (OER), copyright, and CC licenses.
The project was launched during the National Association of Librarians and Public Libraries (ANBPR) annual conference which took place between 10-12 October 2013 in Sibiu, Romania. The presentation prepared by the team project and delivered by Andra Bucur from the Soros Foundation explained in short about copyright issues and their limits, how to apply an open license to a creation, what are open educational resources (OER) and where to find them.
From this conference, participants signed up for a series of workshops which focused on the correct attribution of the CC licenses, aspects of OER, online courses and MOOCs delivered by Bogdan Manolea from ApTI and Nicolaie Constantinescu (ANBPR & Kosson.ro).
The series kicked off in 15 November in Brașov, Romania, as part of the International Colloquium on Social Science and Communication, a social science academic event.
Subsequent workshops were held in December 2013 and January 2014 at V.A. Urechia Regional Library in Galați; at Octavian Goga Regional Library in Cluj; at Polytechnical University in Timișoara; and University Vasile Goldiș in Arad. Future workshops wil take plece in Iași and Bucharest in February 2014.
The partners of the project are also organizing a conference in Bucharest during the open education week to share the best practices on education taught, but also learned in the project.
CC Romania also attended BVCCC – the first CC Film Festival to be ever organized in Romania that took place in Brașov in November 2013. This was a great opportunity for the team to reach out to a different type of public — mostly local artists and digital content creators.