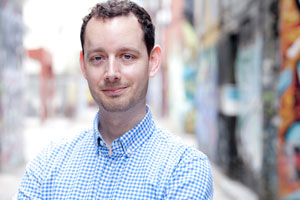 After an extensive search, the Creative Commons board of directors is pleased to announce that Ryan Merkley will be our new CEO. He’ll start work on June 1, and we’re all looking forward to working with him.

Ryan joins us after a career working to advance social causes and public policy in nonprofits, technology, and government. As chief operating officer at the Mozilla Foundation, Ryan contributed to the development of Mozilla products and programs supporting the open web, including Lightbeam, Webmaker, and Popcorn, and also established Mozilla’s successful individual fundraising program. Ryan was most recently managing director and senior vice president of public affairs at Vision Critical, a Vancouver-based SaaS and market research firm. Before that he held leadership roles at Toronto’s City Hall, including senior advisor to Mayor David Miller, where he initiated Toronto’s open data project. Ryan also served as director of corporate communications for the City of Vancouver and the 2010 Winter Olympics. He has an impressive track record of leadership in civic-minded and technology-centered organizations — and I think he’ll make a great leader in the Creative Commons movement.

As the board has gotten to know Ryan after the past several weeks, he’s articulated a strong vision to us for the future of the organization. He understands that the internet has changed a lot since we first launched the CC licenses, and that our relevance requires an evolving technology strategy. Ryan speaks enthusiastically and eloquently about the future of Creative Commons. It is clear to me, and I think to anyone he meets, that he has been working in our world as an outspoken supporter of our mission for almost as long as Creative Commons has existed.

He also recognizes that this is a crucial moment for CC and its allies: we must work together to strengthen and protect the open web. As the web has become more stratified in a world of apps, and as new laws and court decisions stand to dramatically extend terms of copyright and make it more difficult for people to build upon the work of others, our role has never been more important.

Once again, the board would like to voice our appreciation for the work of outgoing CEO Cathy Casserly. She substantially advanced CC’s mission over the past three years. Under Cathy’s leadership, Creative Commons helped numerous governments around the world adopt open education policies, and we saw considerable growth and engagement in the CC Affiliate Network.

And finally, our sincere thanks to Lisa Grossman and staff at m/Oppenheim Associates for helping us conduct a swift and successful CEO search.

Please join me now in welcoming Ryan to Creative Commons.