In the first of a series of blog posts focusing on our global activities, Matt McGregor tells us of exciting developments in CC in New Zealand Aotearoa.

2014 has been a busy year for the commons in Aotearoa. After a few years of relatively slow progress, many of New Zealand’s public institutions have started to adopt open policies. So many, in fact, that we’ve decided to launch an entire website, NZCommons.org.nz, dedicated to discussing the opportunities and challenges of opening New Zealand’s culture and knowledge for access and reuse. With a particular focus on copyright, licensing and the public domain, the NZCommons site aims to help cross-pollinate and energise the various open groups in New Zealand, who are all doing excellent work, though too often in isolation from one another. The site will have news, case studies and a range of pieces from New Zealanders working to grow the commons, supporting and encouraging the many individuals and institutions working to adopt CC licensing across the country.

And what a lot there is to be discussed. I’ve already mentioned some of the developments being highlighted on NZCommons in my recent post to this blog about Creative Commons policies being passed in New Zealand schools, now up to the rate of around one per week. But the increased adoption of CC licensing hasn’t been limited to schools.

And then, in the middle of the year, we saw three big developments in the heritage sector. First, the National Library of New Zealand passed their excellent use and reuse policy, which provides a clear framework for opening up the library’s collections. Under the policy, out-of-copyright works will be clearly labelled as such, which has not generally been the case in the sector; also, in-copyright works that are owned by the library will be made available under a Creative Commons licence. Our case study of this policy has been up on NZCommons for a few weeks now.

Te Papa, the Museum of New Zealand followed this announcement by releasing over 30,000 high resolution images under either a no-known copyright or a Creative Commons Attribution Non-Commercial No Derivatives licence — a figure that has since approached 40,000. As it happens, we published a case study about Te Papa recently, as well. Since that release, Te Papa have signalled that they will shortly remove the ‘ND’ restriction from their licences.

Then, the WW100 team, announced that as part of New Zealand’s commemorations of the Centenary of World War I, the Turnbull Library was openly releasing the H Series of photographs taken during by New Zealand’s official photographer, Henry Armytage Sanders. As Melanie Lovell-Smith points out in a detailed background piece, these photographs are “the most comprehensive visual record of New Zealanders on the Western front from 1917 to 1918.” Other GLAM projects, such as the Marsden Online project, are also starting to use CC licensing.

One of the most exciting things about these announcements is the best practice implementation by each of the institutions. Although all of them use their own method, all of the photos are clearly marked as being available to download and free of copyright restrictions, with a detailed and easily accessible description of what you can and can’t do with the image (see pictured). Te Papa even allows you to use copyright status as a search term. This level of transparency when it comes to copyright is essential to unlocking the value of our national collections. 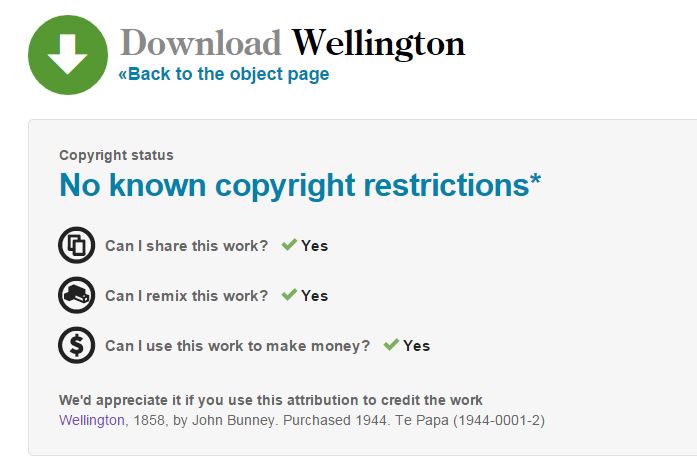 In the government data sector, Land Information New Zealand have released truly massive — and massively interesting — open datasets, including detailed aerial photography of the entire country and 3D models of Christchurch before September 2010. These openly licensed models can be adapted and 3D printed by anyone, to help remember the heritage that was lost in the earthquakes.

Taken together, these projects will add an enormous amount of high quality copyright works to the commons, making it easier to access and reuse the works produced and held by New Zealand’s public institutions. These releases promise to save time and money for both the organisations involved and the public. They will also enable others to adapt and build on existing works, which means that fewer people will have to — excuse the cliche — reinvent the wheel.

Good news, then. But these projects are only the beginning: there are thousands of other schools, heritage and research institutions with millions of copyright works that could be made openly available to the public for sharing and reuse. This could fundamentally change how New Zealanders access and engage with their culture and knowledge.

For this to happen, these sectors are going to need some help. To help out, we’re developing toolkits — remixing some resources and platforms developed by HQ, and making a bunch of our own — that organisations can use to open their works for reuse. These toolkits will include an introductory paper, brochures, articles, sample policies and examples of best practice from New Zealand and around the world. We’re hoping to launch them at the National Digital Forum in Wellington in late November.

Beyond the toolkits, though, we’re going to need much more open discussion and analysis on copyright, licensing and reuse — especially in the heritage sector, where copyright issues can be very complicated, and where there isn’t nearly enough information and discussion available online. NZCommons is designed to prompt that discussion. With it we hope to build momentum and support for more open policy across the country, and help realise the potential of the commons in Aotearoa.