Today the Fabricatorz Foundation announced an open call for applicants for the Bassel Khartabil Fellowship. 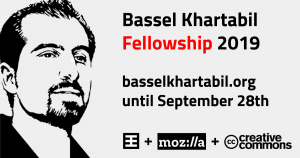 Bassel was taken from the streets in March of 2012 in a military arrest and interrogated and tortured in secret in a facility controlled by Syria’s General Intelligence Directorate. Despite international outrage at his treatment and calls for his release, in October of 2015 he was moved to an undisclosed location and executed shortly thereafter.

“Bassel was not only a dear friend, but also a fearless advocate for free culture who showed us all what a true commitment to the betterment of humanity looked like,” said Barry Threw, Executive Director of Fabricatorz Foundation. “His work could not have succeeded without the friendship of a global community. With supporters like Mozilla Foundation and Creative Commons, we can make sure the next generation can advance the values core to Bassel’s life.”

Fellows are expected to lead projects or initiatives that will catalyze free culture, particularly in societies vulnerable to attacks on freedom of expression and free access to knowledge.

Special consideration will be given to applicants operating within closed societies and in developing economies where other forms of support are scarce, but all interested applicants are encouraged to apply.

The Fellowship is organized by Fabricatorz Foundation with support from Creative Commons and Mozilla Foundation, along with partnership from Khartabil’s final projects: Nophotozone and #NEWPALMYRA.

Fellowship applications will be accepted on BasselKhartabil.org, or by email at fellowship@basselkhartabil.org, through September 28th.

The Fellow will be selected by a jury of free culture community luminaries, and presented at the 10th anniversary Mozilla Festival, from October 21-27 in London. Throughout their one-year term, the chosen Fellow will receive a stipend of $50,000 USD, mentorship from affiliate organizations, skill development, project promotion, and fundraising support from the partner network, as well as other benefits.

Find more details about the Fellowship at BasselKhartabil.org