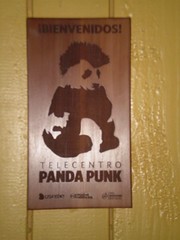 ” Because the indemnification received by the violation of a Creative Commons license – the first case in Chile and Latin America – the “Panda Punk Lab” was inaugurated yesterday (Monday), which will benefit more than 200 students of the E-120 “María Saavedra” School, Chillán.

During the ceremony, the Director of Studies of NGO Derechos Digitales, Alberto Cerda, emphasized how this donation ratifies the validity of the CC licenses to share and spread intellectual works, and protect them from non-authorized uses.

The case was born in April of 2007 when designer Armando Torrealba realized one of his works – a panda bear drawing with pink punk hair – was used by a retail store for publicity without his authorization. After NGO Derechos Digitales’ intervention, the enterprise indemnified the professional with a non-specified amount, part of which was destined to the implementation of this laboratory.”