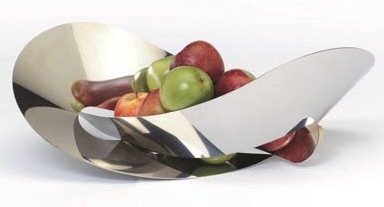 Open-Design is an alternative way of designing art. In his M.A. thesis, Ronen Kadushin felt there was a problem with realizing creativity in industrial designs. Ronen, an Israeli designer that also lectures at the Universität der Künste in Berlin, saw that while in fields like music, graphic design, video, etc., creating became inclusive for all and also independent of publishers or producers — all thanks to the digital technology and the internet. But according to Ronen, it isn’t like that for industrial design. It is being left behind because it has material output that needs marketing investment and support from producers.

To solve all that he came up with Open-Design, which combines CNC production and CC design information for publication and distribution. “It is an alternative method to design and production that in my view, is in touch with the realities of information technology and economics,” noted Ronen. He added that while doing his research, he liked the flexibility, clarity, and simplicity of CC.

According to Ronen’s thesis, consumers today are design aware and often look for products with attribution to the designer, as an added value to the designer’s fees. Ronen sees Open-Design as a way in which the designer is also at the center of the customer-base, not only th producer or product. For him, Open-Design is an adventure, an experiment involving his profession and life.

CC-Israel wants to thank Ronen Kadushin for answering our questions and sharing with us his work.