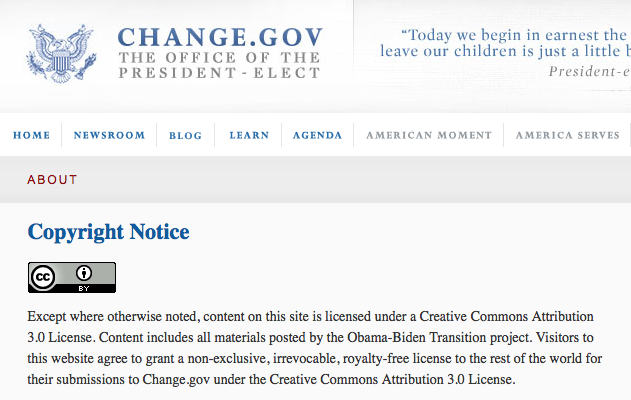 Change.gov, the website of US president-elect Barack Obama’s transition team, has undergone some important and exciting changes over the past few days. Among them is the site’s new copyright notice, which expresses that the bulk of Change.gov is published under the most permissive of Creative Commons copyright licenses – CC BY.

Except where otherwise noted, content on this site is licensed under a Creative Commons Attribution 3.0 License. Content includes all materials posted by the Obama-Biden Transition project. Visitors to this website agree to grant a non-exclusive, irrevocable, royalty-free license to the rest of the world for their submissions to Change.gov under the Creative Commons Attribution 3.0 License.

This is great news and a encouraging sign that the new administration has a clear sense of the importance of openness in government and on the web (there’s a bit more on this over at Lessig’s blog). The embrace of Creative Commons licensing on Change.gov is consistent with earlier support by both Obama and McCain for the idea of “open debates.” (It’s also in line with Obama’s decision to publish the pictures in his Flickr Photostream under a Creative Commons BY-NC-SA license – pretty cool!)

Tim O’Reilly has written a smart post (which has elicited some very thoughtful reader comments) recommending that Change.gov use revision control as a way to further improve transparency and make it possible for the public to review any changes that occur on the site. Of course, licensing is just one component of openness, but getting licensing right is necessary for enabling people to truly take advantage of technologies that facilitate collaboration.

Update: Several people have pointed out that “works created by an agency of the United States government are public domain at the moment of creation” (see Wikipedia for more on this). Change.gov is not currently the project of a government agency, but a 501(c)(4) that has been set up to manage the Obama-Biden transition. Also, the public is being invited to contribute their own comments and works to the site, and it is important to have a clear marking of the permissions that other people have to this material.