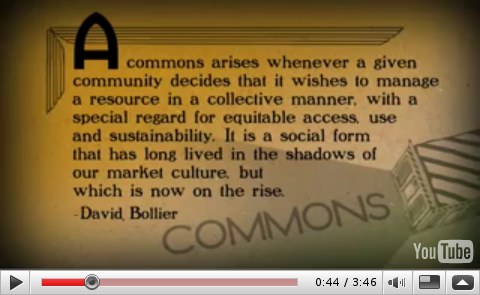 The Commons Video is a 3 minute 46 second animation (licensed under CC BY) from On The Commons and The New Press making the case for an expansive conception of “The Commons” as a means to achieve a society of justice and equality. From the video’s description:

In a just world, the idea of wealth–be it money derived from the work of human hands, the resources and natural splendor of the planet itself–and the knowledge handed down through generations belongs to all of us. But in our decidedly unjust and imperfect world, our collective wealth is increasingly concentrated in the hands of a few. There is be a better way–the notion of the commons–common land, resources, knowledge–is a common-sense way to share our natural, cultural, intellectual riches.

A good portion of the video from the captured point above (1:53) on concerns intellectual commons, based on the writing of David Bollier and others. Bollier is author of Viral Spiral, a history of CC and related movements (previously blogged).

Some readers will find the expansive and social justice oriented conception of commons described by the video compelling. Others will find the argument that tangible goods thought of as commons confuses the unique case in favor of a commons of intellectual goods, given the latter’s non-rival nature. But such confusion is often willful, certainly not informed by subtle and historical arguments about the nature of commons.

Agree or disagree with the perspective presented in The Commons Video, it’s a useful reminder that lessons concerning the management of real and intangible goods don’t always flow in the direction or say what one might expect.

For more on the expansive commons point of view, watch for an extended featured commoner interview with Bollier soon.