Creative Commons vice president Mike Linksvayer accepted the award saying, “It’s an incredible honor. Creative Commons should be giving an award to the Free Software Foundation and Richard Stallman, because what Creative Commons is doing would not be possible without them.”

Congratulations also to Wietse Venema, honored with the Award for the Advancement of Free Software for his “significant and wide-ranging technical contributions to network security, and his creation of the Postfix email server.” 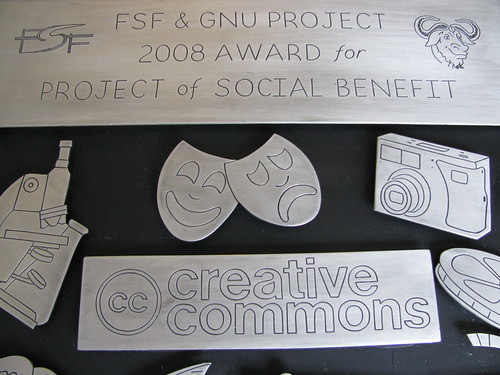 It is worth noting that the FSF Social Benefit Award’s 2005 and 2007 winners are Wikipedia and Groklaw both because it is tremendous to be in their company and as the former is in the process of migrating to a CC BY-SA license (thanks in large part to the FSF) and the latter publishes under a CC BY-NC-ND license.

Only last December CC was honored to receive an award from another of computing’s most significant pioneers, Doug Engelbart.

Thanks again to the Free Software Foundation and Richard Stallman. Please join us in continuing to celebrate the 25th anniversary of his founding of the free software movement. As Stallman would say, “Happy Hacking!”