We’re very pleased to announce that effective today, noted educator, education innovator and journalist Esther Wojcicki is the new chair of the Creative Commons board of directors. From the press release:

“I am thrilled to take on this new role,” said Wojcicki. “I strongly believe that the Creative Commons approach to sharing, reuse, and innovation has the power to totally reshape the worlds of education, science, technology, and culture at large. My main goal as chair is to make average Internet users worldwide aware of Creative Commons and to continue building the organization’s governance and financial resources. I am also very eager to help CC’s education push at high school and college journalism programs worldwide.”

Read the whole release for more.

Also see outgoing chair James Boyle’s CC BY(e bye) post — finely crafted writing down to the title, as we have come to expect. As you’ll read, Boyle, a founder of the modern movement for the intellectual commons (and CC itself), will remain deeply engaged in the movement. There remains no better in depth explanation of the intellectual commons than Boyle’s book, The Public Domain.

Thank you and congratulations to both Wojcicki and Boyle! 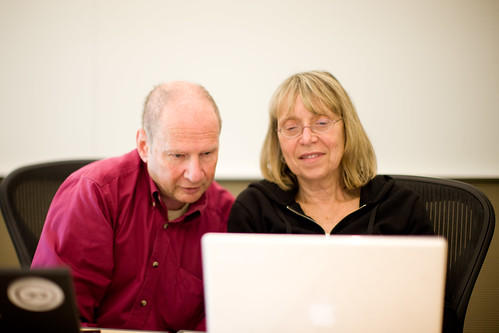 CC board members Hal Abelson and Esther Wojcicki. Photo by CC CEO Joi Ito / CC BY. Note that our celebratory offer of Joi’s Free Souls book for a donation to CC is still on.