Yesterday the Register posted an article by Charles Eicher on the topic of copyfraud — asserting copyright where it doesn’t exist, or asserting more restrictions than copyright grants. A very important topic — true copyfraud diminishes the commons, either in the sense of propertizing the public domain, or effectively reducing the scope of uses not restricted by copyright.

Unfortunately, the article merely uses this interesting and important topic as a jumping off point for hyperbole. On the public domain and copyfraud, comments on the article offer far more insight than the article itself.

Eicher has in the past called advocates of Creative Commons “freetards”. Apparently he finds name calling more interesting than research, for on the third page of his copyfraud article he demonstrates willful ignorance on the topic of Creative Commons: 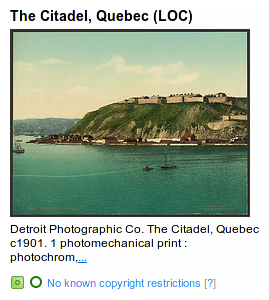 Public domain licensing is still not available to any Flickr user. This forces everyone, from individuals to large public institutions, to contribute their works to the “Flickr Commons” under a CC license, even if the works are clearly in the public domain. Flicker is enacting a blatant power grab on behalf of Creative Commons. They are establishing an extra-legal licensing monopoly, imposing an illegal copyright license structure on free works. And this is the most pernicious effect of copyfraud: it exploits the public domain to aggregate monopoly power for private interests.

Except for the first sentence (regarding which, Creative Commons encourages Flickr to offer a public domain option for all users) all of the above paragraph is blatantly false. Images part of Flickr Commons are not under any CC license. The site’s easily accessible usage statement says No known copyright restrictions. Ideally the site might use a more affirmative public domain assertion, but it is impossible to characterize the statement as a CC license or as copyfraud.