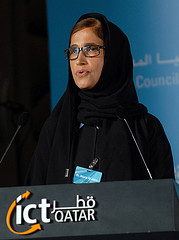 Qatar’s Supreme Council for Information and Communication Technology, ictQatar, is among the many governments making waves by promoting openness and Creative Commons. During the welcome address at last weekend’s Digitally Open conference in Doha, the ictQATAR’s Secretary General Dr. Hessa Al-Jaber announced that “all future ICT Qatar projects will be open source, and we aim to use these solutions throughout the government. Open Source should be the solution for every government initiative.” She listed a range of domains where openness would benefit Qatari society, including education, medicine, and the arts. “Being open can even be considered a moral obligation. I am excited about the potential this country has,” Dr. Al-Jaber explained.

Governmental bodies around the world are adopting Creative Commons licenses and signaling to their constituencies that these works can be shared in simple, interoperable ways. Just this week, the current Portuguese President Aníbal Cavaco Silva released his official photostream under CC BY, while also posting a CC BY-licensed announcement to run for re-election on SoundCloud.

New Zealand recognizes that reuse of government copyright works by individuals and organizations may have significant creative and economic benefit for the country. To harness this potential and enable greater access to public sector works, the enacted NZ Government Open Access and Licensing (NZGOAL) framework standardizes licensing of copyrighted works by State Services agencies by using Creative Commons licenses and recommends the use of ‘no-known rights’ statements for non-copyright material. The Dutch government also demonstrated a great degree of leadership when it instituted CC0 as the default copyright policy of the Dutch national government’s unified website, which contains the websites of all the ministries. All content on www.rijskoverheid.nl is available without restrictions unless noted otherwise.

Creative Commons applauds these initiatives and looks forward to working with key governmental institutions such as ictQatar and others to pioneer further efforts. To foster original Arabic content and improve education and innovation, ictQatar pledged to establish policies that encourage open source solutions in governmental IT and oversee a major national digitization effort to release Arabic-language content under Creative Commons licenses. These are just a number of initiatives agreed upon during the Digitally Open conference as part of a vision to strengthen the voice of the region.

Furthermore, thanks to the generous support of ictQatar, many CC Affiliates and community members traveled to Doha to participate in the second CC Arab World regional meeting. A summary of the meeting will be published shortly, including information about the region’s roadmap and consensus-driven translations of key CC terms into Arabic. You can contribute feedback to the roadmap when published, and importantly, please consider donating today to Creative Commons to support the licensing infrastructure that many governments and other important institutions and creators rely upon.