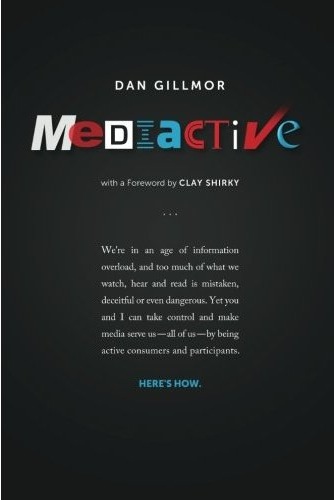 Dan Gillmor is a journalist and established author, having previously published We the Media back in 2004 under a CC BY-NC-SA license. His subject is the changing landscape of media, and the focus of his first book was on distributed, grassroots journalism and its effect on the Big Media monopoly of news. Six years later, We the Media is still in print, and Dan talks about how this encouraged him to stick to his principles when publishing his second book, Mediactive, under Creative Commons as well. Dan turned down a publishing deal with a major New York publisher because they would not allow the CC license. In a reflection well worth reading, he writes,

“Almost a decade after Creative Commons was founded, and despite ample evidence that licensing copyrighted works this way doesn’t harm sales, book publishers remain mostly clueless about this option, or hostile to it. As David explained to editors, the main reason I’m still getting royalty checks for We the Media is that the book has been available as a free download since the day it went into bookstores. This is how word about it spread. Had we not published it that way, given the indifference (at best) shown by American newspapers and magazines, the book would have sunk without a trace.”

Also Mediactive “isn’t just a book; at least, not in the way most publishers understand books, even as they dabble online. And if a principle means anything to you, you stick by it when doing so is inconvenient, not just when it’s easy.”

Sticking by his principles seems to have paid off, as just three days after publishing Mediactive under CC BY-NC-SA online, 1,500 visitors to his site downloaded the book, and more viewed pieces of it online. At this point, Dan notes that “Far few have purchased the book, of course, but it’s selling — and I’ve barely begun the real marketing process, which will take place in the new year.”

Without Creative Commons and the internet, Mediactive would still be on the publishing floor somewhere:

“Incidentally, had I signed with a traditional publisher, the book would not have reached the marketplace for a year or more from the date when I signed. With a company like Lulu, you wrap up the project and you’re off to the races. In a fast-moving area like media, that’s a huge benefit to foregoing the standard route.”

You can download, donate to, or purchase Mediactive and read more about Dan’s experience with publishing here. You can also help us improve our case study on Dan Gillmor.