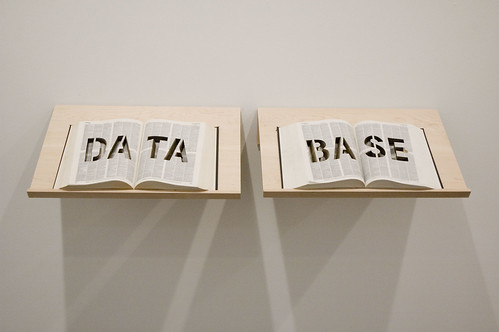 You may have heard that data is huge — changing the way science is done, enabling new kinds of consumer and business applications, furthering citizen involvement and government transparency, spawning a new class of software for processing big data and new interdisciplinary class of “data scientists” to help utilize all this data — not to mention metadata (data about data), linked data and the semantic web — there’s a whole lot of data, there’s more every day, and it’s potentially extremely valuable.

Much of the potential value of data is to society at large — more data has the potential to facilitate enhanced scientific collaboration and reproducibility, more efficient markets, increased government and corporate transparency, and overall to speed discovery and understanding of solutions to planetary and societal needs.

A big part of the potential value of data, in particular its society-wide value, is realized by use across organizational boundaries. How does this occur (legally)? Facts themselves are not covered by copyright and related restrictions, though the extent to which this is the case (e.g., for compilations of facts) varies considerably across jurisdictions. Many sites give narrow permission to use data via terms of service. Much ad hoc data sharing occurs among researchers. And increasingly, open data is facilitated by sharing under public terms, e.g. CC licenses or the CC0 public domain dedication.

Since soon after the release of version 1.0 of the CC license suite (December, 2002) people have published data and databases under CC licenses. MusicBrainz is an early example (note their recognition that parts of the MusicBrainz database is strictly factual, so in the public domain, while other parts are licensible). Other examples include Freebase, DBpedia (structured information extracted from Wikipedia), OpenStreetMap, and various governments (Australia in particular has been a leader).

More recently CC0 has gained wide use for releasing data into the public domain (to the extent it isn’t already), not only in science, as expected, but also for bibliographic, social media, public sector data, and much more.

With the exception of strongly recommending CC0 (public domain) for scientific data, Creative Commons has been relatively quiet about use of our licenses for data and databases. Prior to coming to the public domain recommendation for scientific data, we published a FAQ on CC licenses and databases, which is still informative. It is important to recognize going forward that the two are complementary: one concerns what ought be done in a particular domain in line with that domain’s tradition (and public funding sources), the other what is possible with respect to CC licenses and databases.

This is/ought distinction is not out of line with CC’s general approach — to offer a range (but not an infinity) of tools to enable sharing, while encouraging use of tools that enable more sharing, in particular where institutional missions and community norms align with more sharing. For a number of reasons, now is a good time to make clear and make sure that our approach to data and databases reflects CC’s general approach rather than an exaggerated caricature:

CC licenses other than EU jurisdiction 3.0 ports are silent on database rights: databases and data are licensed (i.e., subject to restrictions detailed in the license) to the extent copyrightable, and if data in the database or the database itself are not copyrightable the license restrictions do not apply to those parts (though they still apply to the remainder). Perhaps this differential handling of database rights is not ideal, given that all CC licenses (including jurisdiction ports) apply worldwide and ought be easily understandable. However, those are not the only requirements for CC tools — they are also intended to be legally valid worldwide (for which they have a good track record) and produce outcomes consistent with our mission.

These requirements mandate the caution with which we approach database rights in our license suite. In particular, database rights are widely recognized to be bad policy, and instance of a general class of additional restrictions that are harmful to the commons, and thus harmful to collaboration, innovation, participation, and the overall health of the Internet, the economy, and society.

If database rights were to be somehow “exported” to non-EU jurisdictions via CC licenses, this would be a bad outcome, contrary not only to our overall mission, but also our policy that CC licenses not effectively introduce restrictions not present by default, e.g., by attempting to make license requirements and prohibitions obviate copyright exceptions and limitations (see “public domain” and “other rights” on our deeds, and the relevant FAQ). Simply licensing database rights, just like copyright, but only to the extent they apply, just like copyright, is an option — but any option we take will be taken very carefully.

What does all this mean right now?

(1) We do recommend CC0 for scientific data — and we’re thrilled to see CC0 used in other domains, for any content and data, wherever the rights holder wants to make clear such is in the public domain worldwide, to the extent that is possible (note that CC0 includes a permissive fallback license, covering jurisdictions where relinquishment is not thought possible).

(2) However, where CC0 is not desired for whatever reason (business requirements, community wishes, institutional policy…) CC licenses can and should be used for data and databases, right now (as they have been for 8 years) — with the important caveat that CC 3.0 license conditions do not extend to “protect” a database that is otherwise uncopyrightable.

(3) We are committed to an open transparent discussion and process around making CC licenses the best possible tools for sharing data (including addressing how they handle database rights), consistent with our overall mission of maximizing the value of the commons, and cognizant of the limitations of voluntary tools such as CC’s in the context of increasingly restrictive policy and overwhelming competitive threat from non-sharing (proprietary data). This will require the expertise of our affiliates and other key stakeholders, including you — we haven’t decided anything yet and will not without taking the time and doing the research that stewards of public infrastructure perform before making changes.

(4) is a corollary of (2) and (3): use CC licenses for data and databases now, participate in the 4.0 process, and upgrade when the 4.0 suite is released, or at least do not foreclose the possibility of doing so.

Regarding discussion — please subscribe to cc-licenses for a very low volume (moderated) list, intended only for specific proposals to improve CC licenses, and announcements of versioning milestones. If you’re interested in a more active, ongoing (unmoderated) discussion, join cc-community. You might also leave a comment on this post or other means of staying in touch. We’re also taking part in a variety of other open data discussions and conferences.

By the way, what is data and what are databases?

(Note that CC has been very interested in and worked toward standards for mixing content and data — apparently taking off — because such mixing is a good method for ensuring that content and data are kept accurate, in sync, and usable — for example, licensing and attribution information.)

All of this highlights the need for interoperability across “content” and “data”, which means compatible (or the same) legal tools — a good reason for ensuring that CC licenses are the best tools for data, databases and content — indeed a mandate for ensuring this is the case. Thanks in advance for your help (constructive criticism counts, as does simply using our tools — experience is the best guide) in fulfilling this mandate.