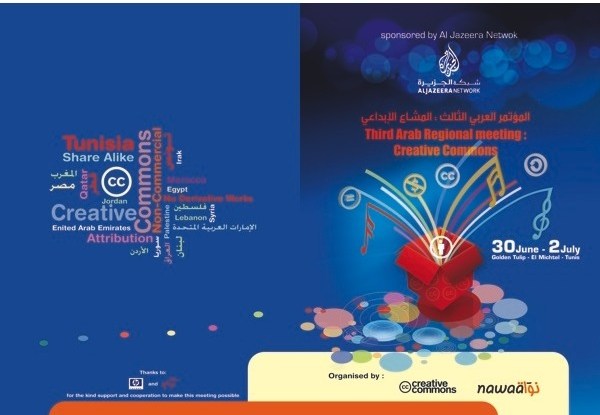 The 3rd Creative Commons Arab regional meeting will occur on June 30 to July 1, and will gather Creative Commons communities consisting of youth and civil society members across various fields (education, law, art, music) that are actively spreading the values of openness, sharing, peer-production, collaboration, and innovation in the Arab world. The meeting will celebrate these communities and values.

The meeting is in cooperation with Nawaat.org, the Tunisian blogging platform awarded the 2011 Netizen Prize by Reporters Without Borders, and is sponsored by the Al Jazeera Network. It will take place in Tunis, where the Tunisian revolution took place in December 2010, and the Arab youth began to reshape the region, giving a burst to creativity and cooperation as the basis of a better future for new Arab generations.

The meeting will feature a set of workshops with the following goals:

The workshops are entirely designed and led by volunteer members of the Creative Commons Arab regional communities from the following countries: Jordan, Lebanon, Syria, Egypt, Qatar, UAE, Morocco, Tunisia, Iraq, and Palestine. Most of the workshops will be “hands on” and will be entirely led in Arabic. The outputs (visual art works, music works, blogs, etc.) will be regrouped and featured online after the meeting.

Each workshop will address one of the following issues:

All workshops are free, and open registration through the CC Arab mailing list and Nawaat.org has brought more than 50 participants from Tunis and other Tunisian municipalities (working language: Arabic). The plenary sessions are open to everyone and translation between Arabic and English will be provided. Access the full agenda of the meeting here. 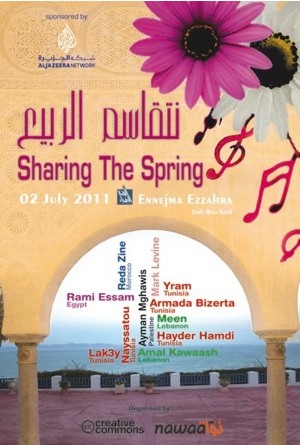 To close the meeting, a free CC music concert will take place the evening of July 2nd at the Center for Arab and Mediterranean Music. Musicians from across the Arab world (Palestine, Egypt, Morocco, Lebanon) and particularly those from Tunisia will pay a tribute to openness by performing their music (pop, hip hop, rock, classical Arab music) in a “jam session” sort of evening, where remix between the different artists will be encouraged and peer-production will be celebrated.

All music played during the performance will be released under a CC BY-NC license, and will be compiled to produce the first CC-released Arab music CD featuring the best young talented musicians in the Arab world. The CD will be launched and distributed this fall through a viral social game involving most of the Arab capitals and the online Arab communities. Al Jazeera Mubasher TV channel will broadcast the event live. The goal of both the concert and the CD is to boost the idea of openly licensed music and legal sharing in the region, encouraging the Arab youth to share music legally but also to produce their own through peer collaboration and remixes enabled by the CC licenses. Check out pre-coverage of the concert by Rolling Stone (ME) and Italian News Agency ANSA.

For more information on both events, see the Creative Commons Qatar announcement.