Last week, Muslims all over the world celebrated Eid al-fitr, a festivity which marks the end of the holy month of Ramadan, dedicated to fasting and praying. Since 2010, Arab world–based Creative Commons communities have celebrated Ramadan by organizing “Creative Commons Iftars” (CC Iftar) across the region. 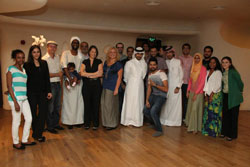 A CC Iftar is a social event where people gather to celebrate the breaking of the fast, socialize, and talk about innovation, creativity, and the open web. CC Iftars are built around the spirit of sharing which lies at the basis of Creative Commons’ vision, and which people in Ramadan celebrate by breaking the fast together, partaking food, and giving to others.

This year, Creative Commons Arab communities have organized and celebrated CC Iftars in four Arab countries: Qatar, Tunisia, Morocco, and Iraq. CC Iftar Doha kicked off in the Qatari capital on August 13 at K108, a restaurant that redistributes its proceeds to charities working on issues such as unprivileged children’s education. Guests at the CC Iftar Doha were asked to share their ideas about inspiration and the outcome was crafted into a collaborative art project. 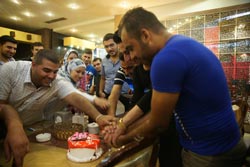 The day after, August 14, it was CC’s Tunisian community’s turn to join the CC Iftar project, with the first CC Iftar hosted in the country. Since the third Arab regional meeting “Sharing the Spring” was held in the Tunisian capital in summer 2011 to celebrate Arab youth’s blossoming innovation and creativity, Creative Commons Tunisia’s community — largely made up of photographers, cartoonists, musicians and techies — has been growing incredibly. Many community-led events, including the first CC Tunis Salon, have been hosted in the country. CC Tunis community gathered in the beautiful location of the Sidi bou Said park with home-cooked food (and lots of cats!) to discuss future projects to be held not only in the Tunisian capital but all across the country.

August 17 was our Moroccan community’s turn to host its first ever CC Iftar, with lots of people attending the gathering in Rabat. Morocco recently joined the broader CC Arab community by organizing Open Taqafa and the first Creative Commons Salon in Casablanca. The country has a vibrant artistic and musical scene, together with an high-skilled tech community, and many of these techies and artists are now joining their Arab peers’ efforts to bring more open and collaborative culture to the Arab world. CC Iftar Morocco was a big step in the direction of getting more regional cooperation over common open-culture-related projects. 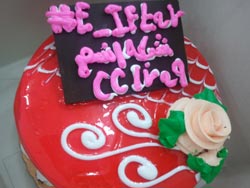 On the very same day, CC’s Iraqi community was also organizing its first CC Iftar. Bloggers from the Iraqi network for social media (INSM) coming from different parts of the country gathered in Baghdad to celebrate openness and sharing with a wonderful CC chocolate cake. For those who were not able to attend the event physically, a skype session was held in order to join the celebrations virtually. Our CC team in Iraq has a Facebook page around which the community is gathering. Some of its members are regulars at CC Arab regional meetings and we hope to be able to hold CC events in Iraq more regularly, in order to familiarize the broader Arab community with the beauty and cultural richness of the country.

Despite the instability, violence, and political unrest still happening in many places in the region, the Arab world still has a strong will to move forward, create, and share. The community-driven enthusiasm and self-organization skills showed by the CC groups in Qatar, Tunisia, Morocco and Iraq prove this; hopefully next year new communities will be able to join and old communities will be able to come back to action.

As we conclude Eid al-fitr this year, our thoughts go out once again to Bassel Khartabil aka Safadi, CC Syria public lead. Bassel was one of the promoters of the CC Iftar project back in 2010, when he hosted an iftar in Damascus to celebrate cultural cooperation and sharing in a remix project with CC Lebanon. Bassel has been detained by Syrian authorities since March 15th, 2012. A campaign has launched to ask for his release and the response of Creative Commons’ communities worldwide has been overwhelming. We encourage you to spread the word and follow updates on the campaign’s site freebassel.org and on Twitter @freebassel.

4 thoughts on “The Arab CC Community Celebrates with CC Iftars”