Donate Now
Creative Commons > Blog > Weblog > Oppikirjamaraton: How to Write an Open Textbook in a Weekend

One Thursday a few weeks ago, just as most of us at Creative Commons were on our way home for the evening, we saw this startling tweet:

Of course we had to learn more. I contacted Joonas Mäkinen to get more information, and he explained to me that he’d helped organize a team to write a secondary school mathematics textbook over a weekend, in an event called Oppikirjamaraton (“textbook marathon”). The book was to be licensed CC BY, so that anyone could reuse or remix it in Finland or around the world.

The text — now in version .91 in GitHub — is called Vapaa Matikka. The title translates as “Free Math,” but since matikka can also mean “burbot,” the book’s title also reads as “free fish” and its slogan — Matikka verkosta vapauteen — could be either a rallying cry to keep educational resources free and open or an instruction to free a fish from a net. 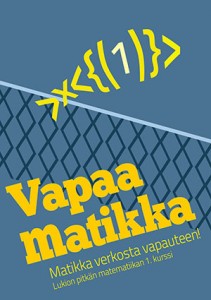 But I was interested in more than math puns. I wanted to find out how the book sprint had gone, what the team was planning to do with the textbook, and what advice he had for others organizing similar events. This interview was conducted by email between October 2 and 5.

What range of math concepts does the book cover?

It is a text book for the first advanced level mathematics course in Finnish upper secondary (high) schools. Although people who just start the course have usually just finished their mandatory primary school studies, we decided to take quite a “for dummies” approach and try to minimize all the prerequisites.

We introduce rational numbers, go through the arithmetic of them and real numbers in general. Power rules and roots follow and lead to the very basics of equation solving and the concept of a function. The most important applications of all this are proportionality and percentage calculations. Even with the freedom of writing we had we were tied to the current curriculum.

Tell me more about the curriculum requirements. Are they the same throughout Finland?

There is one national curriculum and everyone follows it. The only standardized tests you get are your finals, or matriculation examinations as they are known here, so some book series approach topics in a slightly different order than others. There is some flexibility and writing a course book based on the curriculum was easy.

Doesn’t change the fact that the curriculum sucks, though. The first reaction from a lot of participants was: “Can we write a new curriculum first?” And I understand them. We don’t have wars over content as I’ve understood you have in the USA, though. It’s more about how certain topics are grouped together in courses.

In the case of advanced level mathematics, there are 10 national, mandatory courses that consist of approximately 18 75-minute lessons. Plus a few optional courses, plus a lot more if you’re in a science- or math-focused school. An example of a highly non-mathematical, non-systematic grouping would be for example a course which is supposed to cover sequences and trigonometric functions. These two have nothing in common at this level. They could if series expansions and complex numbers were taught earlier, but nooooo… 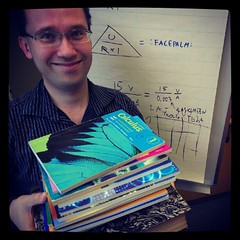 What was the breakdown of participants? Was everyone involved an educator? Did participants have prior experience writing or editing textbooks?

There were over 20 people who partook in writing that weekend. We had regular upper secondary teachers, university students (mathematics and computer science), a teacher of automotive electronics, my own private students, and even a couple of university professors working both locally and remotely. We had our own inner circle of enthusiastic grammar nazis, too, to help us actually write grammatically and typographically better materials than you see in some books by big publishers. The diversity of people involved turned out to be a great resource for producing a variety of problems and perspectives.

A few people had experience writing and publishing a “normal,” old-fashioned commercial book, but that experience didn’t seem to divide people into groups at all when we actually started working.

How did you organize yourselves? Were people’s roles in the project determined before the weekend began?

Vesa Linja-aho, who got the idea of this booksprint/hackathon in the first place, was our de facto PR and bureaucracy guy. Lauri Hellsten promised to take the main role in creating much-needed graphics at the set. Other than them, no writer was predestined any specific work. Surely quite a few people had their own topics they really, really wanted to write about, but all in all the whole writing process was very spontaneous and dynamic. 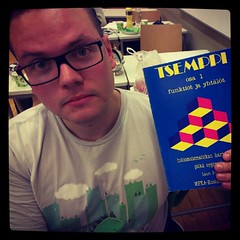 How much preparation happened ahead of time? Did you enter the weekend with an outline of the book? Schedules?

After realizing that this could be a big thing we just sort of waited for our friends and friends’ friends to fill out a Doodle poll about which weekend we should pick. I planned a table of contents beforehand to have something as a starting point, but it was modified very heavily during Friday and Saturday. Juhapekka Tolvanen made us some LaTeX layout templates beforehand, and we also had one planning meeting but that was not really about content but more about technology: which version management systems we should use, etc. Most of the planning in general was just about getting potential sponsors, writing a press release, checking where we can actually do the writing work, did we have enough laptops, and so on.

One funny copyright anecdote: we had gathered up pretty much all available, related text books. You know, to check how others have explained this and that. Another reason was that in mathematics education (and obviously in other subjects too) there are usually many “pathological” examples and exercises that it’s good for everyone to go though, so you keep running into and using the same tasks again and again. Vesa Linja-aho had received a written decision earlier from the local copyright council that exercises do not constitute works and thus are not copyrightable. Nevertheless, a teacher who had written one of the books we had with us commented and reminded us on our Facebook page that it’s not right to copy others’ work. We got some good laughs out of that. 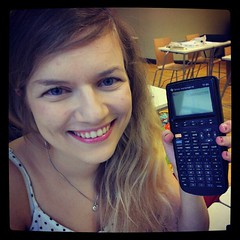 What did you learn from the experience? What was more difficult than you expected? What advice would you give others planning a similar sprint?

Get the tech side done before you start, and that will save everybody’s nerves and time for the actual writing! We used LaTeX to write and typeset the whole book and Github to handle versions, but hassling with both caused a lot of delays during the first two days. Most people were not familiar with Git and version conflicts and other funnies took maybe a half of our time. Just think what we could have achieved if everyone had had their laptops completely ready…

Some guys were still debating if we should add this and that during Saturday and Sunday, and that was something people should try to avoid. In sprints like this, it’s always the best to just keep writing more content – it’s always easier to comment out or edit something later on. Some arguments got pretty heated a couple of times, but that might also be the lack of sleep talking. Keep it cool and remember to have fun! 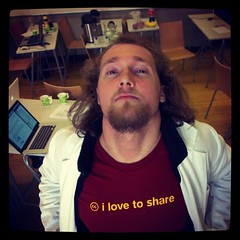 What’s next? Is there a revision or review period planned? Are there educators planning to teach from it?

The immediate physiological response after finishing the marathon on Sunday was euphoria. Everyone agreed immediately to organize another sprint. The technical delays and lack of graphics artists made sure that our book didn’t reach the level of ready that we’d just send it to printing immediately, but it’s alive now: people keep sending “bug reports” over Github and all participants have continued to make improvements: fixing typos, adding exercises, fixing inconsistencies…

Our book is now version 0.9, and we’ll wait a couple of weeks till we say it’s appropriately ready for translations and focused printing. Though, we’ve already been hearing that the book has been used as a handbook by a couple of teachers, some have been giving their students exercises from the book and so forth. And of course I and other writers have used it as a resource, too, when teaching our own students. After some polishing we’re pretty sure it’ll be used in plenty of places. Another kick in popularity will come when we continue with the rest of the courses (since schools don’t like to switch book series between courses).

The project was so fun and well-received that we’ll have our next sprint on the second course soon!

One thought on “Oppikirjamaraton: How to Write an Open Textbook in a Weekend”