Creative Commons has been involved in discussions at the World Intellectual Property Organization (WIPO) over the last several years, and we’ve made interventions in support of the public domain, as well as other topics.

One issue in particular that is resurfacing at WIPO is a draft treaty for the Protection of Broadcasting Organizations, or “Broadcasting Treaty.” If passed, the Broadcasting Treaty would grant to broadcasters a separate, exclusive copyright-like right in the signals that they transmit, separate from any copyrights they or others may have in the content of the transmissions. Some advocates of the treaty support granting these rights to broadcasters for a minimum of 50 years (and others, for a minimum of 20). And, because these additional rights would add a layer of rights atop the underlying copyright in the works being broadcast, the Broadcasting Treaty would permit broadcasters to restrict access to works already licensed under a Creative Commons license, or in the public domain. This new set of rights would unnecessarily complicate the rights-negotiation process that Creative Commons has attempted to simplify. 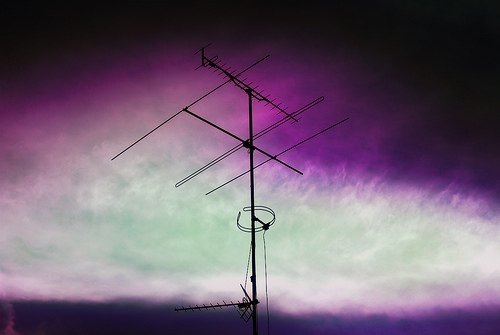 Antennas to Heaven / mhiguera / CC BY

The Broadcasting Treaty has been on and off WIPO’s agenda since at least 1996. This is not the first time that CC has voiced its concern about the potentially harmful effects of a Broadcasting Treaty. In 2006, we signed a letter of concern (PDF) with 37 other organizations representing a broad range of information technology, consumer electronics and telecommunications companies, library associations, and civil society organizations. The letter told WIPO that if a treaty is deemed necessary, it should be based on a “signal-based” approach, focusing specifically on protecting broadcasting signals from intentional misappropriation or theft. The statement called for the inclusion of a mandatory baseline set of limitations and exceptions in order to ensure that uses of broadcasted content that are lawful under copyright law are not inhibited by the treaty. And in general, the letter questioned the need for a Broadcasting Treaty in the first place, suggesting that current legal frameworks already provide the necessary enforcement mechanism for “signal piracy” (unauthorized use of a broadcast, prohibited by the broadcaster).

Why is a Broadcasting Treaty problematic for users of Creative Commons licenses?

A report (PDF) by Professor Patrícia Akester, commissioned by UNESCO, concluded that a Broadcasting Treaty could “prevent or restrict the flow of information with respect to materials which may not be protected by copyright, such as news of the day, or which are in the public domain, because their term of protection has expired or in relation to materials created by third parties who do not wish to prevent dissemination of the latter… . For example, a broadcast of a speech by a public official may be covered by the scope of the proposed Treaty, even though it may not be protected by copyright, and a broadcast of materials under a Creative Commons license may prevent users from fixing such materials.” Anyone who would want to use a broadcast would have been compelled to get permission from the broadcaster in addition to the copyright holder. This would negatively affect users of Creative Commons licenses. It would grant broadcasters an additional right above and beyond those rights granted to the copyright holder. So, even though CC licenses provide for a clear set of permissions in advance, broadcasters’ rights could trump those rights, requiring that a user get permission or pay a license fee to the broadcaster to use the broadcasted content. Most WIPO member nations have agreed to pursue the more limited signal-based approach, but it’s not clear whether this path would avoid interfering with the permissions granted from the Creative Commons licenses.

CC licenses forbid licensees from applying adding technological protection measures (DRM) to a work if doing so prohibits other users from exercising the rights granted under the license. A broadcast treaty that authorizes application of DRM to their signals — depending on its final scope — would very likely conflict with that prohibition. Moreover, the Treaty permits countries to enact far-reaching anti-circumvention laws that stop users from breaking DRM to use the broadcast content — inclusive of any CC-licensed content, which by the terms of the license is expressly permitted. This may put licensees in a situation of either not being able to exercise rights granted under copyright via the CC licenses, or risk violating law when they circumvent the technological protection measure to do so.

Adding additional intellectual property rights via a broadcast right is bad policy and yet another representation of the expanding rights grab from entities who are not the copyright holder. And said well by Public Knowledge, “Intellectual property rights should go to authors or inventors, not middlemen.” This statement represents the underlying utility of Creative Commons since its inception: CC licenses provide powerful yet easy-to-implement solutions in order to reduce the legal transaction costs associated with sharing content. In addition, the Broadcasting Treaty could give rise to a sort of re-enclosure of the public domain by granting rights to broadcasters even after a user has placed a work in the public domain using the CC0 Public Domain Dedication.

The creation of new “copyright-like” rights has been increasing over the last several years, to the detriment of creativity and innovation. The Broadcasting Treaty is a direct attack on the rights of creators to share their work as they see fit under the existing (and increasingly protectionist) copyright regime. As Mike Linksvayer wrote in 2010, “With a proliferation of rights, it is harder to know who has exclusive control over what, or whether multiple parties have exclusive control over different rights over a work. This phenomenon of too many property claims forms what is sometimes called an anticommons — overlapping exclusive claims can prevent anyone from using a work — the opposite (thus “anti”) of a commons, in which anyone may use a work under a clear, easily discernible set of rules.” Creative Commons licenses have been a successful mechanism for creators who want to share to communicate their intentions clearly in an environment that has been increasingly hostile toward them. The Broadcast Treaty is antithetical to these methods of sharing and collaboration, but perhaps most harmful to CC-licensed works and to the public domain.

Bottom line: A Broadcasting Treaty is not needed

Is there need for such a treaty? Public interest advocates point out that the additional rights granted to broadcasters via a Broadcasting Treaty are simply not necessary because broadcasters already have legal remedies available to them to combat signal theft. An often cited example is the famous case of the Canadian company iCraveTV. iCraveTV decided to broadcast via the Internet 17 US-based channels on the grounds that local laws allowed it to transmit wireless broadcast cable signals without paying. And, because these channels were received at the Canadian border, iCraveTV argued it was exempt from paying royalties. Broadcasters in the US sued iCraveTV alleging copyright infringement. iCraveTV quickly settled, and the site shuttered shortly thereafter.

Copyright law already grants a complex bundle of rights to authors, and most of the time broadcasters are either copyright holders or licensees of copyrights. Public Knowledge notes, “broadcast signal piracy is almost always also copyright infringement and already illegal.” Similarly, Knowledge Ecology International wonders why the Broadcasting Treaty is necessary: “[W]e have yet to hear a cogent explanation of the problem the treaty is supposed to solve, or how it will work. We have asked the US government and other countries to explain what piracy problem the broadcaster treaty is expected to solve that can’t be solved by enforcing existing copyright laws and related rights laws, and we are still waiting for an answer.”

Establishing a Broadcasting Treaty could in effect negate the permissions that users of Creative Commons licenses wish to communicate, and grant unwarranted rights to broadcasting organizations that have added little or no value to the underlying work being transmitted. The proposed benefit to society resulting from creation and enforcement of additional rights for broadcasters under a Broadcasting Treaty is unclear. If there is a dire need to create additional rights for broadcasting organizations, the data demonstrating this need should be presented and impartially evaluated. If there is no discernable reason backed up by data, then the treaty should be abandoned.

What are the next steps?

Right now WIPO has released a working document (PDF) on the draft treaty, to be discussed and negotiated at the upcoming WIPO Standing Committee on Copyright and Related Rights (SCCR) meeting taking place in Geneva 19-23 November. Creative Commons is considering developing an intervention for the meeting, as we have permission to attend and contribute to the WIPO proceedings alongside other NGOs. We urge WIPO to make these deliberations as transparent as possible so that the public knows about the discussions. The Electronic Frontier Foundation has already raised concerns that WIPO is pushing for a treaty to be signed quickly. And they also released a statement (PDF) during the July SCCR meeting. WIPO should carefully consider the implications to the public interest and properly address the recommendations from civil society organizations.