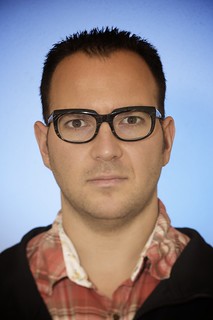 In celebration of Creative Commons’ tenth anniversary, we asked various friends of CC to write about their favorite CC-licensed content. Today, blogger and science fiction author Cory Doctorow writes about the CC-licensed novels of one of the original cyberpunks.

Rudy Rucker’s Wetware books: the finest high-weirdness of the
golden age of cyberpunk

Rudy Rucker is one of the modern heroes of science fiction, one of the original cyberpunks. The early cyberpunks only had a few writers who could be meaningfully called punks — writers like John Shirley and Richard Kadrey — but there was only one who could truly be called cyber: Rudy Rucker. Rucker is a mad professor, a mathematician and computer scientist with a serious, scholarly interest in the limits of computation and the physics and mathematics of higher-dimension geometry.

But that’s just about the only thing you can describe as “serious” when it comes to Rucker. He’s a gonzo wildman, someone for whom “trippy” barely scratches the surface. His work is shot through with weird sex, weird drugs, weird brain chemistry, and above all, weird science.

The Ware Tetralogy is comprised of four novels written between 1982 and 2000, and I gobbled them up as they came out. They describe a future dominated by intensely weird and eerily scientifically plausible self-modifying cluster organisms that use evolutionary algorithms to bud offspring, rising to contend with humanity for dominance of the Earth and its envrions. They also get very, very high. On math. And they screw. A lot. Not like weasels. Not, in fact, like anything. Because Rudy Rucker is NOT LIKE ANYTHING.

Rucker is a tremendously prolific writer and editor who is publishing some of his finest work today (I’ve got his latest, the independently published Turing and Burroughs sitting at the top of my to-be-read pile as I write this). But the Ware books remain at the core of what I think of as the fiction that shaped who I am as a writer and thinker. And they’re available as a free, CC-licensed download (PDF).