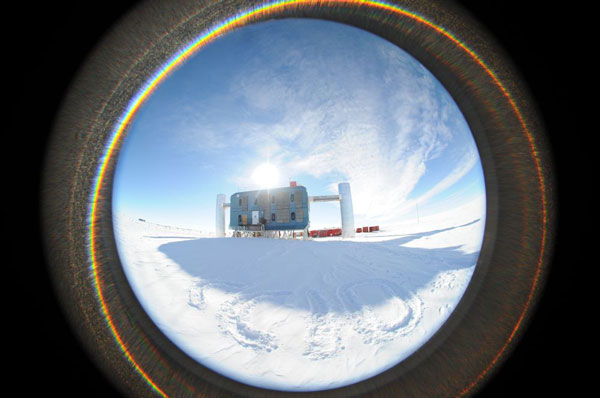 Remember when Jessica said we were “working on” a CC10 meetup in Antarctica? She wasn’t kidding. We got in touch with our friends at the IceCube Neutrino Observatory, and before we knew it, IceCube researchers Nils Irland, Blaise Kuo, and Felipe Pedreros were toasting Creative Commons from the geographic South Pole.

“Nils is part of our IT team and was down to help replace some servers,” IceCube communications manager Laurel Norris told us in an email. “Blaise and Felipe are just now starting their stint as winterovers – meaning they will be at the South Pole for the entire winter (24 hour darkness). Aside for a short trip to the coastal research station of McMurdo, they will not leave the South Pole until Nov 2013.”

As it turns out, IceCube researchers spend a lot of time thinking about the future of open. In its data policy (PDF), IceCube echoes the Antarctic Treaty’s provision that “to the greatest extent feasible and practicable, scientific observations and results from Antarctica shall be exchanged and made freely available.” For information on data sharing in Antarctica, see our case study on Polar Commons.

And with that, we now know of 31 CC10 gatherings around the world, on every continent. There have been five CC10 mixtapes, a CC10 iPhone app, a world-famous virtual singer going CC, and who knows what will happen in the next three days. This community is mind-boggling.

We’re humbled by the worldwide outpour of support we’ve seen for CC’s tenth anniversary. Please join us as we take on the next decade together, and donate $25 to Creative Commons.

One thought on “#cc10 Antarctica!”