This guest blog post was written by Subhashish Panigrahi of The Center for Internet and Society, a Creative Commons affiliate in India.

My name is Subhashish Panigrahi. I am an educator currently working in the community and communication front at The Centre for Internet and Society’s Access To Knowledge program (CIS-A2K), an India-based catalyst program to grow Indic language communities for Wikipedia and its sister projects. Prior to my work at CIS, I worked for the Wikimedia Foundation’s India Program, a predecessor to the current CIS-A2K project.

While building ties with higher education and research organizations, I also try to get educational and encyclopedic resources licensed under Creative Commons licenses so that communities can use them to enrich Wikimedia projects. Currently, there is a low level of content available across all the Indic languages and the need for Unicode-based content is extremely crucial. 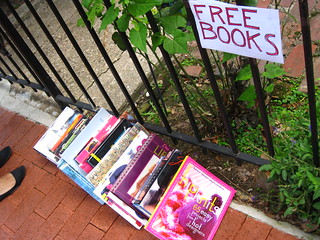 While negotiating with authors for relicensing their books in Creative Commons license, I started identifying certain motivation areas for any author for such free content donation. Some of the authors, publishers, and copyright holders have started learning about open access to scholarly publications. However, the readers who are likely to buy a hard copy of a book are likely to buy it even when a free, virtual version is available – that’s the idea authors who are skeptical about CC licenses need to understand.

Open source book publishing in India has gained much interest and focus, primarily because of the lack of foresight of the possibilities that are tied to the release of books. It was Pratham Books that first came up with the brilliant idea of “One book book in every child’s hand.” The subsequent release of multilingual books under free licenses was the beginning of a new era in Indian publication.

Book publishers should also think of the target readers of print and web media. Releasing content in free licenses doesn’t affect the mainstream print publications. When it comes to books, there is always a scope for reprinting and making money. After negotiations with two authors and getting 13 books about children’s literature, travelogues, popular science, and linguistic and historical research, I am sure the publishing community has not been educated in the right way about providing free access to content.

It generally takes a long time and effort to negotiate with the copyright holders to get the books out with a CC-BY-SA tag. But it is a permanent and a significant value addition for the open knowledge movement. I believe with more online readers and reviewers getting complete access to books, authors gain more respect in the society and popularity which in turn helps them to sell more of the reprints. Two prime fears are keeping many publishers away from releasing their books online for free: the fear of going out of business and the fear of losing ownership of content. But at the same time, some of the publishers are becoming aware of the mass media outreach and winning hearts of many readers by releasing content for free without copyright restrictions.

1. Release of a four-volume encyclopedia in Konkani

In 2013, Goa University released Konkani Vishwakosh, a Konkani-language encyclopedia in CC-BY-SA 3.0 license that they had published. This is the largest encyclopedia compiled in the language. The book is being digitized on Konkani WikiSource and content from it is being used to enrich the Konkani version of Wikipedia. The project additionally brought about 20 active contributors for digitization.

11 books from Odia author and academic Dr. Jagannath Mohanty were re-released under the CC BY-SA 3.0 license by the “Manik-Biswanath Smrutinyasa,” a trust founded by Dr. Mohanty for literary discussions and upbringing new writers. His wife and trust’s current chairman Allhadmohini Mohanty formally gave written permission to release and digitize these books. The Odia Wikimedia community is planning to involve undergraduate students of an indigenous educational institution, Kalinga Institute of Social Sciences, to digitize these books. The trust is also reaching out to publishers who published more than 150 of the author’s books to give permission for re-releasing them under a CC license.

The book is heavy and expensive for any normal reader. Enormous copies were sold after Odia was declared as the sixth Indian classical language; however, this did not stop the authors Dr. Debiprasanna Pattanayak and Subrat Prusty from changing the license term from All Rights Reserved to CC-BY-SA 3.0. 600-plus pages full of historical documents and manuscripts along with many undiscovered areas of Odia language’s literary heritage of more than 2500 years are now going to go on WikiSource and enrich Wikipedia articles apart from being great resource for language researchers.

4. Relicensing books and conversion of ISCII to Unicode font

Two Odia language books by linguist Subrat Prusty, “Jati, Jagruti O Pragati” and “Bhasa O Jatiyata,” have been relicensed. These are few of those thousand books in those the text are typed with fonts with ISCII standard and not Unicode. ISCII standard fonts have glyphs with Indic characters that are actually replacements of the Latin characters by Indic characters. So, a computer with one particular font not installed will display absurd characters. The publication and printing industries still use these fonts as the desktop publishing software package they use for typeset do not have Unicode engine to render the fonts properly. The conversion from these ISCII fonts to Unicode is a way that is going to be used for digitizaing these books to convert the entire book with searchable Unicode content.

One thought on “Report from India: Relicensing books under CC”