In February we said goodbye to Donatella Della Ratta, CC’s longtime coordinator for the Arab world. Today we’re pleased to announce that Naeema Zarif and Sami Ben Gharbia have joined Creative Commons as the regional coordinators for the region. Naeema and Sami join CC’s other regional team leaders, who are key in organizing the Creative Commons Affiliate Network around the world.

After 8 years in advertising, Naeema Zarif took a leap into social enterprise offering expertise on conceptualization and producing both offline and online integrated media initiatives, including print, social web, audio, and film. She is an enthusiastic supporter of open culture, speaking and lecturing frequently at conferences and educational institutes, and contributing visual and digital strategic consultancy and training to various governmental, not-for-profit, and for-profit initiatives around the MENA region. 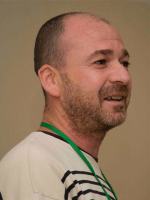 Sami is a Tunisian campaigner, blogger, writer, and freedom of expression advocate. He was a political refugee living in the Netherlands between 1998 and 2011. Sami is founding director of the advocacy arm of Global Voices, co-founder of the award-winning collective blog Nawaat, and author of the first Tunisian e-book (in French), Borj Erroumi XL. He co-founded The Arab Techies Collective and co-organized the The Arab Bloggers Conferences for several years. Foreign Policy named Sami a major world influence in promoting government transparency. Sami received a Prince Claus Award in 2012 for his cyber-activism work. Yahoo! named Sami Ben Gharbia as a person of the year during the 2010 World Press Freedom for his work focused on Internet censorship. Electronic Frontier Foundation awarded Sami and his fellow Nawaat co-founders with their 2011 Pioneer Award.

We recently highlighted some of the ongoing affiliate project grants in the Arab world region, and we look forward to more great developments with Naeema and Sami on board.