All six Creative Commons licenses require licensees to attribute the original creator. Although we provide guidelines for attributing a work, we also recognize that standards for how and where licensees should provide attribution vary a lot from medium to medium. That’s why CC licenses allow licensees to fulfill the attribution requirement “…In any reasonable manner based on the medium, means, and context in which You Share the Licensed Material.”

A recent court case in Germany has raised questions among some CC license users about what qualifies as reasonable attribution. Must websites that use openly licensed images make the attribution information visible at all times, even in a gallery of image thumbnails? And what about when a visitor accesses an image directly, via the “View Image” feature in her web browser? Must attribution information be visible then too?

Fortunately, we believe that common sense has won out in a recent appellate ruling. 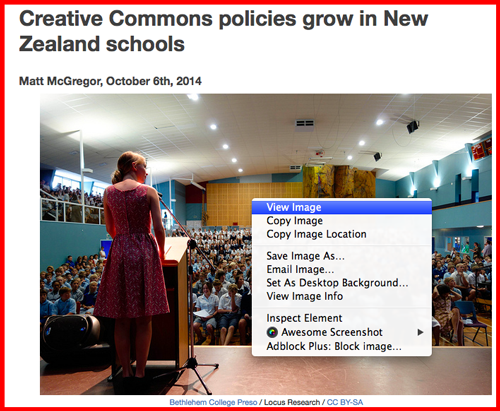 The dispute, which first went to court in February, involves the terms of use of a stock photo site. Although the case did not directly involve Creative Commons licenses, the licensing terms in question were quite similar to the wording of CC licenses’ attribution requirement. Like CC licenses, they required attribution appropriate to the medium in which the photos are used.

The defendant had diligently attributed the rightsholder on the page where they used the picture, but the website also had a dynamically generated “overview” gallery showing preview thumbnails of pictures and the site didn’t restrict users from downloading the images via “View Image.” When a visitor viewed an image in these two ways, attribution information was not visible.

The trial court ruled that the preview thumbnails (which did not include attribution information) were acceptable as they were under the two rulings of the German Federal Supreme Court on preview pictures. Regarding the direct viewing via “View Image”, the court ruled that this was not covered by the thumbnail rulings, and interpreted the terms of service of the stock photo site to require attribution no matter how the picture is viewed. The judges said that the name of the rightsholder would in case of “View Image” need to either be integrated into the picture itself (i.e. as an additional part of the graphic) or be part of the URL of the picture.

The stock photo provider, which was not a party to the case, provided a statement on behalf of the defendant, saying that their terms of service were not intended to require that the name of the author (also) be part of the URL. Nonetheless, the court ruled otherwise. The main argument advanced was that “appropriate to the medium” only applied to how attribution was to be given, not to whether it would be given, and as the picture could be viewed separately, attribution was also required in that view no matter how complicated its implementation would be.

After the decision became public, a debate started amongst bloggers and others who regularly use CC-licensed pictures, many of whom worried whether the court’s strict interpretation of the attribution requirement would also be relevant to how the BY condition of CC licenses is interpreted, at least under German copyright law. It was obvious that almost none of the CC-licensed pictures used on the net are attributed in the graphic itself or in the URL, and that it would be virtually impossible to move attribution to such a standard across the net.

On appeal, the higher district court in Cologne indicated in an oral hearing in August that they did not intend to follow the original decision. Firstly, in their view, the terms of service are very strictly against editing/adaptations of the pictures taken from the site, which speaks against the obligation (or even the right of users) to insert attribution information into the graphics. This would constitute an impermissible edit. Secondly, they interpret “appropriate to the medium” to not only cover how attribution is given, but also to cover whether/when attribution is necessary. The court regards the “View Image” function as a mere technological side-feature of how the web works and not a separate type of use that requires separate approval by the rightsholder. The latter in effect means that this function doesn’t trigger separate obligations on the user’s part, beyond the ones triggered by the use of the picture in the regular browser view. The plaintiffs subsequently took back their claims. Users of pictures that are available under standard terms can relax again to some extent regarding the practicalities of attribution.

While it’s limited to Germany in its legal applicability, this ruling demonstrates how flexible attribution requirements can be well understood by all parties and adapt well to changing technology. The ways that we share content on the web are changing all the time, but if you approach CC licenses with a reasonable, logical approach to attribution, misunderstandings will be few and far between.