In 2017, CC published Made with Creative Commons, a book examining 24 different business models built around CC licenses and CC-licensed content. Financially supported by more than 1600 backers on Kickstarter, the project itself is an example of how openly licensed work can be funded and how CC-licensed content can evolve over time. 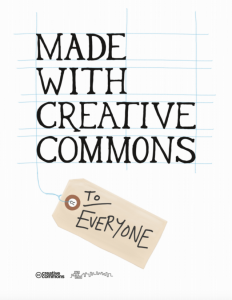 After publishing the book and distributing copies around the world, we have proudly watched as the Made with Creative Commons project continued to germinate thanks to the energy and resourcefulness of the CC community.

Earlier this year, Hilman Fathoni, Fitri Ayu, and the rest of the CC Indonesia team translated the book into Indonesian. They were also able to hold a public event and print copies of the translated book thanks to funding from the Indonesian Creative Economy Agency.

These efforts by you, the CC community, are a testament to the vibrancy, resourcefulness, and ingenuity of the open movement—and your commitment to growing the global commons.

We would like to say thank you to each and every person who has had a hand in carrying this work forward over the last two years, and we look forward to receiving more translations in the future!

If you’re working on a new translation of Made with Creative Commons, let us know by emailing us at info@creativecommons.org or tagging us @creativecommons on Twitter, Facebook, or LinkedIn!