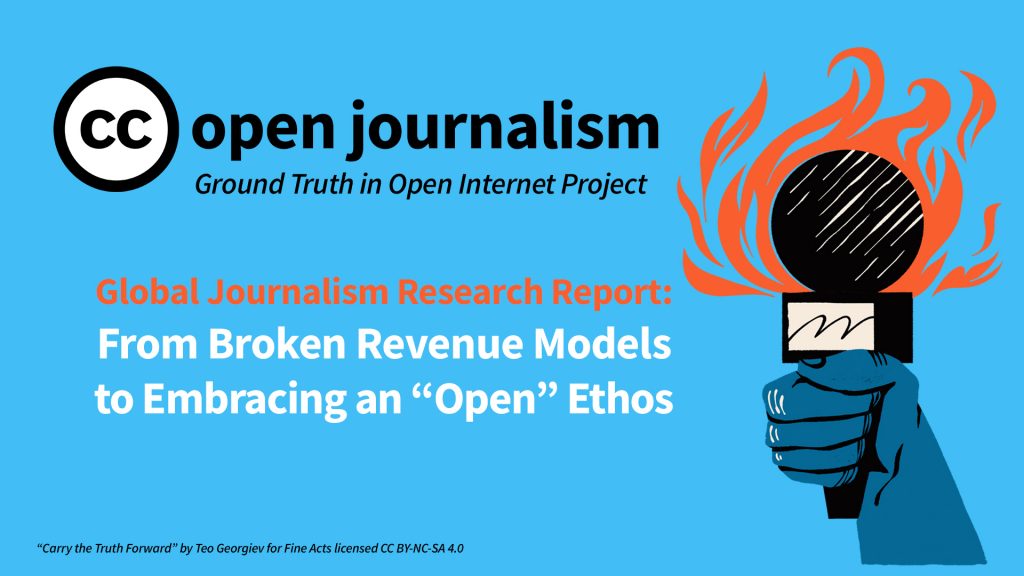 A new global report on the state of journalism has been published by Creative Commons (CC) which identifies the growing challenges of combatting disinformation and the disconnect between the public and the media.

CC, in partnership with Google News Initiative, created CC’s Open Journalism webinar series and training, ‘Ground Truth in Open Internet.’ This training, and the subsequent report, Journalism Research: From Broken Revenue Models to Embracing an “Open” Ethos was created after surveying and conducting focus groups with over 500 journalists from 18 countries to better understand journalists’ needs during this turbulent time as digital news rapidly changes.

The survey and in-depth focus groups found that disruption to local news media revenue has damaged access to accurate information and made it more difficult to combat disinformation. Participants raised four challenges related to the broken revenue model: misinformation and disinformation, the proliferation of online abuse, loss of trust in journalism, and the increasing difficulty of making a living from journalism.

The loss of local newspapers in many places has led to a disconnection between the public and journalists which has partly contributed to the decline in trust. The proliferation of paid-for content has been necessary to maintain the industry but has also led to barriers being erected around news and information that could help to combat misinformation.

Many journalists feel “ground down” by the threats that are targeted at them and, in countries where violence can sometimes be a feature of political debate, some journalists spoke of their fear of being attacked and how that can have a chilling effect on public debates.

The report also found that editorial independence of journalists in the Global South is under threat, with an increasing reliance on advertising income from governments to fund their work.

Journalism is a form of public service, critical to all of us. Unfettered access to verified information is essential for a healthy information ecosystem – essential for democracy. Yet, journalists face threats to their physical safety and online wellbeing, broken revenue models, the closures of local news outlets, and declining trust among readers. Misinformation and disinformation campaigns in the media challenge collective notions of ground truth. They also challenge the bedrock and meaning of an open internet.

CC seeks to advance universal access to knowledge and culture, and foster creativity, innovation, and collaboration. The report shows that more thought needs to be given to how quality journalism can be funded – while keeping it accessible and open to people around the world. It is a critical time to support journalists in their efforts to provide verified information, investigate our shared challenges, and bring essential health, environmental, and political facts to everyone.

In surveys and focus groups, participants noted a need for high quality and open data, and for open, freely accessible content. Journalists also said there is a need for training on digital media literacy and community-driven open source platforms, as well as peer-to-peer collaborations with other journalists.

There is a significant appetite for more access to openly licensed content and public domain research, showing that there could be wide interest in Creative Commons licensed works to help tackle the challenges facing journalism.

Jennryn Wetzler, Director of Learning and Training at Creative Commons, said, “Now is a critical time to support journalists in their efforts to provide verified information, investigate our shared challenges, and bring essential health, environmental, and political facts to everyone. While Creative Commons cannot address many of the challenges journalists face, we believe that principles and practices of an open internet can help journalists in some of their public interest work. From crowdsourcing information on open source platforms, to using CC licenses to increase access to a particular story, applying open internet practices can help free the flow of critical information to empower journalists and citizens around the world.”

The project consisted of an international survey of more than 500 journalists in seven countries and a series of five focus groups across 14 countries, which allowed us to explore some of the issues raised in more depth. Across both the poll and focus groups, we spoke to journalists operating in:

CC supports independent news and we know our licenses play an impactful role in sharing it. During the series, speakers highlighted alternative revenue models and how CC licenses can be used to further the spread of quality information.

Joel Abrams of The Conversation U.S. noted: “Because of the CC licenses on our articles, 60% of authors get contacted by other media agencies [for additional stories]…Forty to 50% of our traffic is through republication. So by the Creative Commons [licenses] we are doubling our outreach.”

During the webinar, speakers highlighted their organizations and other organizations’ priorities for open content in journalism and information sharing.  The webinar series gave a snapshot of other key organizations in our information landscape that use open licensing, such as: The Conversation, Fogo Cruzado, the Centre for Internet and Society, Propublica, Meduza, Meedan, and Wikipedia.

Journalism as we know it faces existential new challenges. Increasingly, journalists face work-halting financial and ethical challenges, as well as threats to their physical and digital safety, when sharing information online. Misinformation and disinformation campaigns in the media challenge collective notions of ground truth. They challenge the bedrock and meaning of the open internet and of the principles on which free and democratic societies are built.

On the other hand, journalism also faces newfound opportunities, as the tectonic plates of power shift in our shared digital landscape. We witness the rising role of nonprofit, independent, community-based media sources, filling gaps where traditional media organizations have shuttered; the rising power of crowdsourcing information and fact checking, and a powerful new role an open internet can play in sustaining the fundamental right to access to information and better knowledge sharing.

While there is no “silver bullet” or simple solution to the interrelated challenges, alternative revenue models paired with open sharing of content, transparent, participatory processes and other open practices begin to address some of the interrelated challenges journalists face. CC supports independent journalists and we know our licenses can play an impactful role in their better knowledge sharing practices. 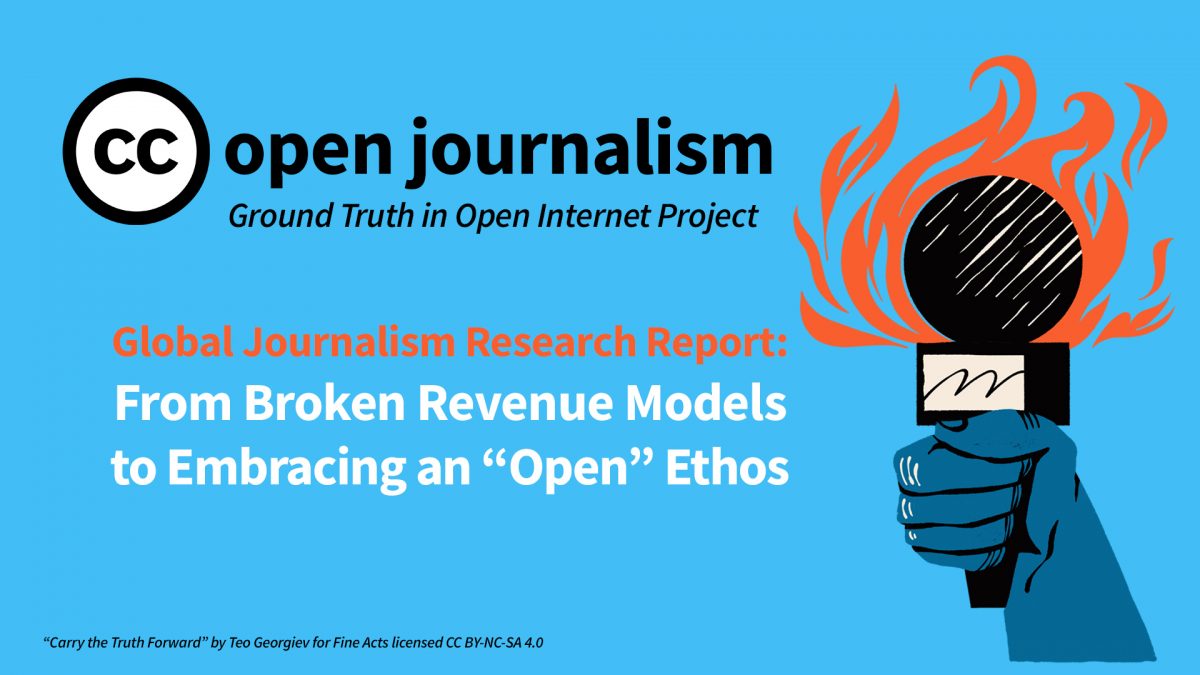 Global Report on the State of Journalism Released

How a News Outlet Used CC BY to Help Its Journalist

The Pangolin Reports: CC Journalism About the World’s Most Trafficked Mammal