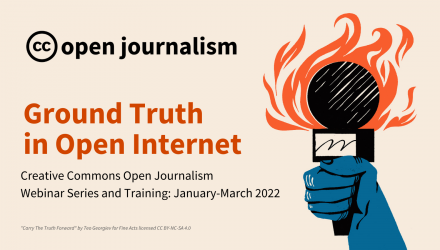 Journalism provides a crucial public service. Access to verifiable information and stories that question the underlying terrain of power is critical to democratic societies. Yet, journalism as we know it faces existential new challenges. Increasingly, journalists face work-halting financial and ethical challenges, as well as threats to their physical and digital safety, when sharing information … END_OF_DOCUMENT_TOKEN_TO_BE_REPLACED

In January 2009, Al Jazeera launched a pioneering initiative: the first news repository licensed under a Creative Commons Attribution license. At the time, restrictions imposed by the Israeli military in Gaza prevented international news outlets from reaching the Strip and reporting from within. Al Jazeera, which had the advantage of being the only news outlet … END_OF_DOCUMENT_TOKEN_TO_BE_REPLACED

Joi Ito is teaching his Digital Journalism course again at Keio University this summer, but this time with a twist. In addition to the traditional semester, where Joi will be teaching within the university, the course will also have an open and online component where anyone may apply to join via the Peer 2 Peer … END_OF_DOCUMENT_TOKEN_TO_BE_REPLACED