Colin Mutchler is one of the original CC success stories. Back in 2003, he posted his song, My Life, to Opsound under a CC BY-SA license. A month later a violinist name Nora Beth added a violin track, calling the new work My Life Changed. It was one of the first instances of CC facilitating unsolicited collaboration, laying the ground work for the amazing remix culture we have seen develop over the past 5 years. Mutchler has since expanded his resume, working on photography and media production as well as his music. We caught up with him recently to find more about what he has been up to since we last checked in – needless to say, it has been a while. 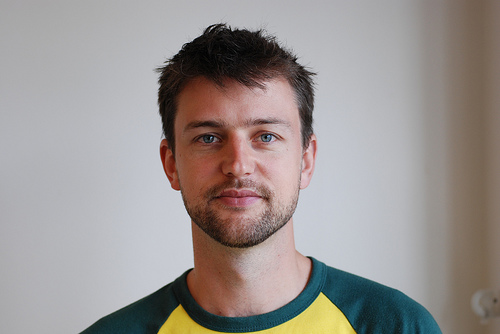 Can you give us some background on yourself and your music? How did you get started as a musician? What are your major influences?

My first 7 years in Bellingham WA were filled with my parents’ sounds from the Grateful Dead and George Winston. But it wasn’t until I first started playing guitar in college that I began to write lyrics, initially inspired by people like Ben Harper, Ani Difranco, and Bob Dylan. Silvio Rodriguez was also an influence ever since I lived in Bolivia in 1998. Then when I saw Saul Williams in the movie Slam in 1999, it became clear that the most powerful voices of our generation would come through Hip Hop and spoken word. Other influential voices for me were Sarah Jones and Alix Olson. For a while I imagined myself becoming a kind of folk-hop version Mos Def and Talib Kweli (still do), but with a full time job in digital marketing and a vision for a crowdfunding media tool for social entrepreneurs, I’m still fighting that daily choice to actually be an artist and musician.

You have been an active member of the CC/Free Culture community for quite some time. How did you become interested in CC? How has it been to watch CC grow as a movement as one of its early adopters?

I collaborated on a post 9/11 video to Radiohead’s “Idioteque” that used footage and photographs without permission from sources like Baraka, Here is NY, NYC Indymedia, Archive Films and television, etc. That experience, along with my work with young producers through the Listen Up! youth media network peaked my interest in how copyright law tended to slow the flow of digital collaboration. Creative Commons seemed like a natural next step. It’s been interesting to see how quickly the collaborative culture that CC licenses have helped serve is now core to most of the most recent wave of the web 2.0 services. Two big challenges I see facing the movement are the search tools, which have still not matured far enough for mass adoption, and simple financial tools that enable collaborators to share financial benefit in a fair way and therefore inspire adoption by professional artists and mainstream businesses.

Your song “My Life” was the centerpiece of one of the earliest instances of reuse through a CC license. Can you describe how that took place and your feelings on it at the time? Do you have any interesting reuse stories since?

It all started in 2003 when I uploaded a guitar track to Opsound.org called “My Life” and then about 2 months later, I got an email from a 17 year old violinist in North Carolina named Cora Beth Bridges, who had added to it. She called it “My Life Changed.” I remember being blown away by how beautiful the track was, and also happy to know there were others like me who wanted to collaborate across space and time. While many have heard the My Life story, lesser known is that it actually continued. Over that next year, I got a version in French (“Ma Vie“), a version with video from two Japanese artists (“My Life Changed Completely“), and another version called “Our Lives Change,” a trans-continental collaboration from the group called Tryad (producers from Seattle, Ohio, and Japan).

Over the few years that followed, I’ve continued to shared works in progress, mostly spoken word and accapella song fragments, through CCmixter.org. The amazing community of producers have built on and remixed my words in some really interesting ways, bringing mood, rhythm and beats to make songs that I could never have made on my own (119 remixes as of Sept ’08). In 2006, I gathered what thought were the best versions, and released the collaboratively produced “Premixed” album through CD Baby’s digital distribution service to iTunes and others. Even today, getting emails with [CCmixter] in the subject are some of my favorite to receive. The open community has confirmed that making digital music has become a shared, virtual, and global process. Of course nothing replaces live performance, which will continue to be essential.

Like many in our generation, I am continually recording and sharing my life and perspectives through emerging digital tools. I share my photography through Flickr and Facebook, and connect my spoken word to images, like with Durham Police, India Shining, Language of My Reality, and Internet Dream. In recent years, I have working as a Senior Producer at the digital agency R/GA, working primarily with Nokia globally to produce digital marketing and experiences to support the evolution of their devices and services. However, it has been interesting to see that there are actually more barriers to using Creative Commons licenses for enabling collaboration in a marketing context for major brands. What I am really interested in exploring is collaborative storytelling using images, voices and music to inspire and transform culture and our economy to be more responsible and sustainable. I think that tools like Creative Commons are essential for increasing the fluidity of culture and removing barriers to collaboration. As a still developing media artist, I have been recently most inspired by the flash storyteller Jonathan Harris, and am looking for more expressive digital instruments (beyond laptops) that would enable the ‘playing’ of live images and video along with a live band. In general, the tension between the seriousness of building a responsible economy and the free expression of being a creative storyteller is at the heart of what I mean by “activefree.”

You’re the founder of activefreemedia, a “community of people and organizations that use money, media and technology to build a sustainable culture and economy of responsibility and freedom.” Can you discuss your involvement with AFM and give some background on the project?

Back in 1999, I imagined an online service that would enable networks of people with shared values to build and fund social and environment media campaigns. At the time, people wondered why anyone would want to collaboratively create videos and invest their own money in that kind of content or project. Now, in the post-Youtube world of crowdsourced and crowdfunded projects like Threadless and Kiva, it is easier to imagine a crowdfunding tool for social enterprises that would enable supporters to help place Google Gadget ads through Adwords onto places like CNN.com, Facebook or other communities online and eventually offline. The plan is use Creative Commons licensed content, and I am currently looking for designers and developers to help build and test an alpha version of the tool, so please contact me or consider chipping in if interested. People generally interested can also sign up for the activefree newsletter.

What’s up next? Anything else you’d like our readers to know?

Since 2005, I’ve moved homes from Brooklyn to a year at INSEAD business school in Singapore and France, and have now been based in London for a little over a year, exploring Berlin and Barcelona as well. In addition to activefreemedia, other projects I am working on (in my spare time outside of work) are “Open Green,” a project to open up and tell impactful stories of whole value chains, and “Luna Piena,” collaborative media events over a lunar month period to share the local stories of a native place. Again, contact me if you are interested contributing time or chipping in to make them real. People can donate to the development fund at activefreemedia.com, which will go to pay designers and developers who will be building the first iteration of the service.

One thought on “Colin Mutchler”