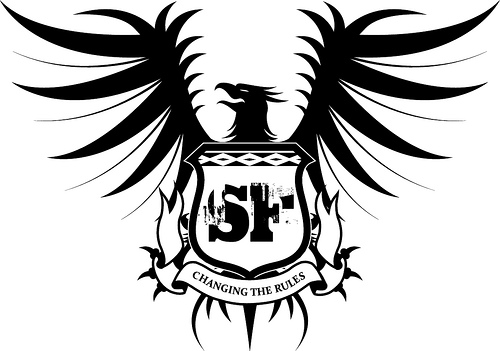 Written, performed, recorded and produced entirely by Jono Bacon, the album touches a range of political and social topics, driven by a brutal, thundering style with pounding double bass drumming, grinding guitars and guttural vocals. The album was recorded in Jono’s home studio in central England and combines a range of styles. Pre-release listening sessions have resulted in comparisons to Metallica, Cannibal Corpse, Slayer, Pantera, Decapitated and Hatebreed.

Jono Bacon, the one man band behind Severed Fifth, released the inaugural album Denied by Reign today. This metal album is trying to bring the idea of Free Culture licensing to the world of metal music. We previously discussed here the announcement of the idea back in June of this year. It is a testament to Jono’s enthusiasm for this project how quickly he was able to write, record, and master this first album while also doing his full time job as Community Manager for Ubuntu. 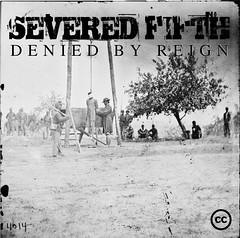 Go get your copy of Denied by Reign via bittorrent (ogg, mp3) or a zip file (ogg, mp3). More options on the release page.

I had a chance to pick Jono’s brain about the project recently and here are his answers for everyone:

First of all, in one sentence, how would you describe the music on Denied by Reign?

Denied By Reign is a pretty intense metal album. The album packs in some intense speed metal riffing as well as mid-paced grinding, thick head banging material. When writing the album I was hooting for a thick, chunky style that is rhythmic and energetic, and something that anyone can get a groove with. When I take Severed Fifth out gigging, I really want to get the crowd moving.

This genre hasn’t seen much adoption of Creative Commons licenses or Free Culture in general, at least so much as the mass media has seen, are there any bands who are doing a similar thing?

I am not aware of any bands that are doing the same kind of style as Severed Fifth. There are obviously various bands doing rock and other variations of metal, but not all that many. With Severed Fifth I wanted to take the style of metal I am passionate about, largely inspired by bands such as Hatebreed, Pantera, Slayer, Arch Enemy etc, and represent it with Free Culture, pushing forward towards the new music economy.

With your current position as the Community Manager for Ubuntu, the most popular GNU/Linux distribution today, what overlap do you see between working with the Open Source Community and the Free Culture Community and how does your experience help and/or hurt your chances of succeeding?

My primary experience with my Open Source work has been in building, growing and mobilising communities. I think my previous experience working with the different communities I have been involved in, and particularly with Ubuntu, has given me some life lessons in how to build up a community to do something interesting. This is at the heart of Severed Fifth – one of the most prominent elements of Severed Fifth is building up the Street Team; a collection of Severed Fifth fans who help to spread the music and the Free Culture message behind the project.

With some big names coming into the game like Nine Inch Nails, how do you see SeveredFifth differentiating itself from other bands who have embraced this new realm of music industry?

I see Severered Fifth as different in a few ways. Firstly, the music. I think that when you take away the Free Culture basis of Severed Fifth and just focus on the music, it is interesting to listen to. I believe the music is interesting enough to get out there and compete with established metal bands.

Secondly, I believe Severed Fifth is a more interesting project from the perspective of Free Culture and the Creative Commons. Much as I have the utmost respect for Nine Inch Nails and Radiohead for CCing some of their work, they already have reputations forged from the traditional music industry. Severed Fifth is entirely new, born in the underground, and exploring if it can get its own legs by starting out as a Free Culture project from the outset. I think if Severed Fifth can be successful, it will show the world that a music project can start out with a Free Culture foundation and be able to support itself, release music and perform tours. I am really keen that Severed Fifth should answer many of the questions surrounding the validity of a Free Culture and Creative Commons inspired music economy.

There was some discussion concerning the license you chose for your debut album, what were your reasons for settling on a Creative Commons Attribution-ShareAlike license?

Originally I chose the Creative Commons Sampling+ license because I was primarily attracted to the fact that it gives the artist exclusivity in selling their work commercially on CD, which is one business model for music distribution. My plan was always to explore this license first and then adjust my licensing based on feedback. Well, before I even released any music, I got plenty of feedback and there was a general feeling that Sampling+ is (a) not a true Free Culture license and (b) restricts some of the most important aspects of a Free Culture work. With Severed Fifth being an exploration of Free Culture, I decided I wanted to do this right, so I chose a Creative Commons Attribution ShareAlike licence.

Lastly, even though you have just released your first album, will we be seeing you on tour or making appearances any time soon?

Yes indeed. My plan is to get the album out and build as much focus around it as possible, and then I plan on auditioning musicians to build a band to get out there and play some Severed Fifth gigs. This is going to take a little time, but I can’t wait to get out there and rip it live up on stage. 🙂

Thanks for your time Jono and I hope the experiment proves to be a great ride!

Thanks Greg, and thanks to everyone at the Creative Commons for all of your help. Yourself, Mike Linksvayer and Jon Phillips have been instrumental in helping me get the Severed Fifth train on the tracks. 🙂

One thought on “Severed Fifth”