Creative Commons International (CCi) is moving! Leaving our office in Berlin-Mitte, we’ll be moving to Berlin-Schöneberg to share workspace with Wikimedia Germany. Our move builds upon existing collaborations with local Wikimedia projects and the hope of continued support and unified efforts. To date, CCi has teamed up with Wikimedia Serbia, one of the institutional hosts of the CC Serbia project, and Wikimedia Indonesia will soon begin overseeing the porting of the CC licenses to Indonesian law. Nordic CC and Wikimedia communities are also strengthening ties, as demonstrated by the recent “free society” conference FSCONS, organized by CC Sweden, Wikimedia Sweden, and the Free Software Foundation Europe.

It is our hope that the office share will build bridges across projects, people, and resources. As reported last month, the Wikimedia/Wikipedia community is now deciding whether to offer wiki content under CC BY-SA 3.0. These discussions follow the Free Software Foundation’s release of version 1.3 of its Free Documentation License containing language which allows FDL-licensed wikis to republish FDL content under the CC Attribution-ShareAlike license until August 1, 2009.

Read more about the move in our press release. 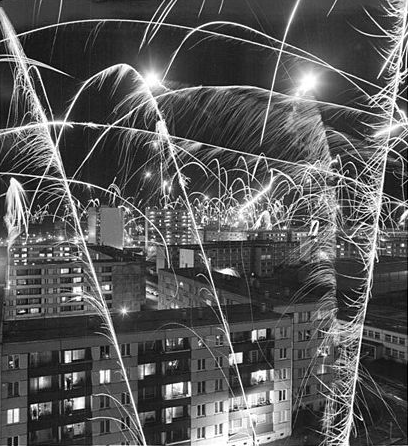 Good news reaches another Wikimedia project, Wikimedia Commons, which hosts hundreds of thousands of freely licensed Creative Commons media and serves as the multimedia back-end of Wikipedia. Everyone is encouraged to upload as much educational free media as they can in order to benefit the commons, and this is exactly what the German Federal Archive has decided to do.

Since December 4th, the archive is uploading around 100,000 photos to Wikimedia Commons, all licensed under our Attribution-ShareAlike license. The subject matter varies from not-so-ordinary street scenes to famous German sights, but all of the photos are high quality and offer great snapshots of modern German history. Check out the contributions from BArchBot to keep an eye as the uploads progress over the next couple of weeks.

A very warm congratulations to our new office mates, Wikimedia Germany, and to the German Federal Archive for organizing such a significant and valuable contribution to the commons!