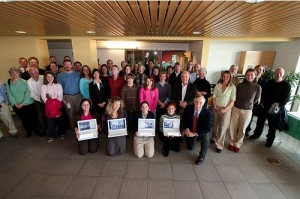 Photo by Vital Signs CC BY

Yesterday, Vital Signs kicked off their new site with more than 300 supporters, including Maine’s former Governor Angus King, who spearheaded the initiative that resulted in a laptop for every 7th and 8th grader in the state. Vital Signs, a field-based science education program at the Gulf of Maine Research Institute, started 10 years ago just before the turn of the century. Since then it has evolved to “[leverage] Maine’s laptop program to enable students to participate in a statewide effort to find invasive species, and to document the native species and habitats most vulnerable to future invasions.” The new site “provides a digital platform, including social networking tools, to facilitate a fluid exchange of knowledge between students and experts. It changes each student’s relationship with science from distant spectator to thoughtful participant.” You might remember our Back to School feature on them, or even my Inside OER interview with Sarah Kirn, the Manager of the project, from the spring of 2008.

Back then, CC Learn and VS tossed around a lot of ideas on how to get them to move towards openness, and now more than a year a later those ideas have come to fruition. Their new site leverages the research and data of more than 50 middle school classrooms who are paired with real scientists, researchers, and conscientious citizens to explore and address the issue of invasive species.

“Stewarding 32,000 miles of rivers and streams, 6,000 lakes and ponds, 5,000 miles of coastline and 17 million acres of forest is a job for every Maine citizen, young and old,” said Andrew Fisk, director, Bureau of Land and Water Quality, Department of Environmental Protection. “Engaging seventh and eighth grade students in the issue of invasive species promises to build a heightened level of public awareness and a meaningful body of scientific knowledge. You never know who will save the next lake from a milfoil infestation. The kids are a resource of significant magnitude for us.”

Now Vital Signs work can be leveraged by other states and around the world. The new site’s default licensing policy is CC BY, which means that anyone is free to copy, distribute, adapt, or remix VS work as long as they attribute Vital Signs. The issue of invasive species is not unique to Maine, and now Vital Signs can lead in opening up the work that will enable future solutions.