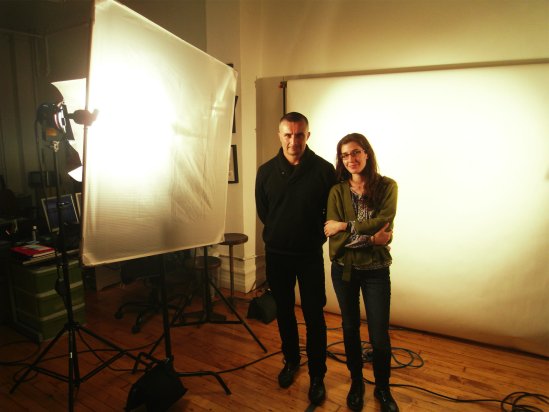 Since then, the number of CC-licensed films on the site has grown, with each license having its own Web TV channel (CC BY and CC BY-NC for example). They even have a channel dedicated to the public domain. All of these “Web TV” channels are available under the terms of said license for you to share or remix.

Creative Commons has its own channel where we’ve uploaded some of our videos. We wanted to learn more about how Film Annex helps filmmakers make money on their CC licensed content, so we caught up with Eren and Francesco, pictured above, to pick their brains.

How is Film Annex different from other online film distribution platforms?

In terms of profitability – Unlike most film distribution platforms that host videos on their main platforms only, Film Annex creates free Web TVs for filmmakers who want to present their work under specific domain names. This way, Film Annex creates a brand out of the filmmaker’s name, company, or project and reduces the implementation of the forward-slash (/) mentality as seen on Vimeo, YouTube, and other similar platforms. For example, for the acclaimed director Abel Ferrara, Film Annex created www.AbelFerraraTV.com. There is a monthly 50/50 revenue share on every Web TV so the filmmakers can maintain a regular income through showing their films on their Film Annex Web TVs. Statistics show that Film Annex shares 6 to 9 times more revenues with its content providers compared to YouTube.

In addition to its Web TV Network, Film Annex offers filmmakers all of its tools and technology for free on its main platform, www.filmannex.com. There’s no cost for registering to Film Annex, and all common video formats are accepted for uploads. Upon signing up to Film Annex, content providers get the option to sell their films for a price of their choice and/or stream them for free. Filmmakers receive 100% of the sales revenues on their films.

In terms of flexibility – Film Annex does not take any copyrights from content providers, and therefore allows them to maintain complete control and freedom over their content at all times. Film Annex’s online contract is non-exclusive, so content providers can share their films and videos on other platforms as well. In addition, Film Annex gives the content providers the flexibility to add to and remove content from its platform any time. Most importantly, Film Annex offers its content providers the option to choose from different Creative Commons licenses when they upload their films on its platform. This means, in addition to the standard “All Rights Reserved” license, Film Annex offers CC licenses to filmmakers, such as Attribution, Attribution Share-Alike, etc. with the intention to make Film Annex a more open and collaborative platform and encourage the sharing and remixing of content for the creation of better and more interesting collaborative work.

Film Annex supports Creative Commons, because we believe that the usage of CC licenses can cause a significant increase in the creation and sharing of content on the web. The standard “All rights reserved” license, though protects the copyright owner, prevents content providers from sharing their work with others in an “open” way. An “All rights reserved” license restricts content to being viewed only, whereas CC licensed content can be shared, remixed, and reused in a safe, legal way. This encourages productivity and further creation/distribution of content among filmmakers who start finding it more comfortable to collaborate with other content creators and share their work freely on the Internet.

How can filmmakers make money by using CC licenses on Film Annex?

Filmmakers who have CC licensed films on Film Annex can get their own free Film Annex Web TVs, where they will get paid 50% of the generated advertising revenues every month. Moreover, Film Annex gives filmmakers the option to syndicate their Web TV players on third-party websites (including their own), where they will receive an additional 33% of the advertising revenues. Filmmakers can also earn money by participating in Film Annex’s online film contest, the War of Films.

What is the War of Films and how does it work?

The War of Films is a monthly online film contest to help filmmakers with the promotion and advertising of their films by increasing their interaction with their fans, followers, and the film community at large. The film that gets the highest number of votes on Film Annex’s platform at the end of the month is the winner of the $1000 cash award. Film Annex also rewards the most active voter with $100 (US, Canada and UK) or $25 (other countries) at the end of each day. Viewers can vote once a day for or against a film to support the filmmakers of their choice. The total number of votes will be visible to all viewers at all times, and the films with the highest number of votes will be featured on Film Annex’s homepage.

Any exciting new developments in the works?

From March 5th through the 15th, Film Annex will be at the Miami International Film Festival as an official sponsor and to conduct interviews with the filmmakers and industry professionals attending the festival. Film Annex will also do further festival coverage, such as red carpet events, opening and closing night screenings, award ceremonies, etc.

Film Annex has recently updated its Web TV layout to make it more user-friendly and easier to navigate. From now on, every Web TV will have its own community section so that the filmmakers can create a fan base around their content.  Viewers will also be able to comment on films on the Web TVs, message each other, etc.

Film Annex is in the pre-production period for ‘Red Notice,’ a web series, inspired by Dante’s Inferno and INTERPOL stories, that will involve the participation of actors and production teams from around the world.  We have opened up the auditions to candidates both in and outside the United States who will be uploading their audition videos on www.RedNoticeTV.com.

You can also check out the Web TV channels that correspond to each CC license:

One thought on “Film Annex”