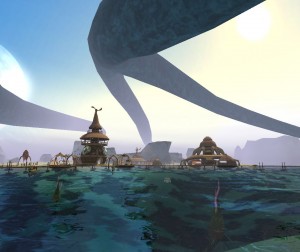 Games are almost unique in how tightly the medium requires the interweaving of software and culture.  Amongst the many genres of video games that exist today, the MMORPG is probably the most complex and requires the most depth both on the side of the code and content.  Since Ryzom is a mature, well developed project, the scale of this release and its significance for both free culture and free software are both truly incredible.  In the words of Winch Gate’s own press release:

By freeing Ryzom code, Winch Gate is transforming the MMORPG marketplace and is setting a precedent for how gaming software should evolve–in freedom. The source code released totals over two (2) million lines of source code and over 20,000 high quality textures and thousands of 3D objects.

Some components aren’t released yet to the public (notably the music and sounds, although this is apparently in progress) and the world data for the main server isn’t being released to keep the player community from fracturing.  Notably also, the current tools for creating game data require proprietary software, but the Free Software Foundation notes that there are efforts under way to make these actions editable incorporating free software tools such as Blender.  However the components that are already available: the server code, the client code, and the many models, animations, textures and etc, already bring many great community opportunities.  The freeing of these resources opens them for study, modification, and incorporation into other works and games of compatible licenses.  And of course the existence of all these components also means that one can run a fully free-as-in-freedom virtual universe of one’s own.  If you ever dreamed of the carving of virtual worlds, here’s your great chance.