Freesound is a collaborative database of nearly 120,000 sounds. We first posted about the project in 2005. Freesound specializes in sounds, not songs, and those sounds have been used thousands of times from ccMixter remixes to a major motion picture.

The project has just launched a complete rewrite of its site, with a new, modern look, and a new, modern codebase that will enable the project to grow and add features over the coming years. Congratulations to Bram and the entire Freesound community! Hop over and get involved.

Freesound 2.0 also brings a long-awaited licensing migration, which the rest of this post delves into. Later in 2005, we interviewed Freesound project leader Bram de Jong:

CC: What led you to mandate use of a CC license for all samples in Freesound?

BdJ: Simply because the creative commons licenses are clear licenses, well thought of, well documented and above all quite modular. We doubted a long time about which license to choose, and in the end decided to go with Sampling+. In retrospect we chose wrong, and we’re planning to ask our users to switch to Attribution/Attribution-NonCommercial, but that’s a bit further in the future.

In 2006 the project started a poll which would inform the eventual license migration:

A large fraction (37%) of the community also wanted a public domain option (and fortunately we launched the CC0 public domain dedication in the interim). The image below shows what the Freesound 2.0 license migration options look like for existing users: 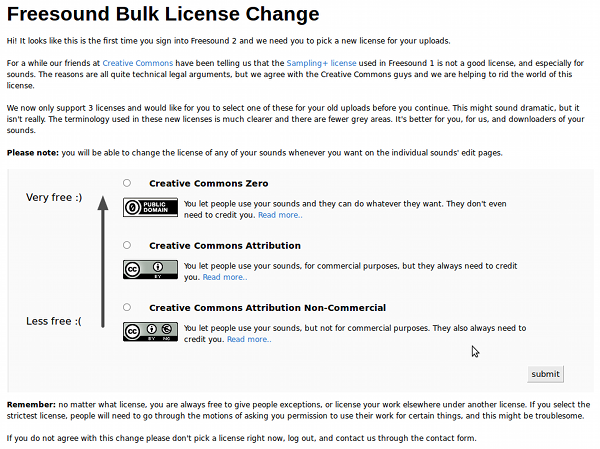 We expect this migration to result in greatly increased use of Freesound-hosted sounds, and of Freesound itself, especially to the extent users choose to migrate to CC0 and CC Attribution — this will be the first time Freesound samples will be available under fully free terms, and thus usable by anyone for any purpose, including massively in massively collaborative projects such as Wikipedia, which insists on such terms.

Creative Commons is taking this opportunity to retire the Sampling+ license, as well as the NonCommercial-Sampling+ license (the latter was not used by Freesound, nor by any major project, and probably should have been retired years ago). For a big picture explanation of why we’re retiring these licenses, and why now, see the following text from an email explaining plans for retirement to the Creative Commons board of directors:

[In 2007] we retired the sampling and devnations licenses due to low usage and failing to permit a minimum of noncommercial verbatim distribution worldwide (retirement means we don’t recommend use for new works and add to http://creativecommons.org/retiredlicenses — the deeds and legalcode stay up forever for anyone already using them).

It is approaching time to retire the sampling+ and nc-sampling+ licenses due to low usage and lack of interoperability with the six main CC licenses. We’ve further come to understand the importance of interoperability and clarity. While niche licenses in theory could attract more creators do the commons by addressing specific needs, they detract from the commons by subdividing it into incompatible pools and making the commons harder to understand.

The only major site using sampling+ (there are none of significance using nc-sampling+) is Freesound, a sound sample repository. Freesound 2.0 will be launched, with CC0 as the recommended option, but also support for BY and BY-NC, and a push to ask contributors to re-license (or dedicate to the public domain) previous uploads. We intend to retire the sampling+ licenses in conjunction with the launch of Freesound 2.0, giving that important community the respect and attention it deserves while at the same time demonstrating our continued rigorous commitment to an interoperable commons.

If you’re interested in even more details concerning why Sampling+ was not right for Freesound, and right for Creative Commons to retire, continue reading…

After the initial suite of 11 CC licenses (cut back to 6 in version 2.0) was launched in late 2002, it wasn’t clear that CC shouldn’t create even more licenses to address particular niches. Those following the free and open source software world knew that “license proliferation” had a bad name, but the world outside software is very diverse, so CC explored, including an education-specific license (never developed, which was just the right thing, as CC’s standard licenses have turned out to work just great for learning materials), a license which only granted broad permissions in the developing world (retired, see link above), and perhaps most interestingly, a remix-only license, at one point briefly be called the Recombo license (a tribute to CC’s popularity in Brazil), in the end launched as the Sampling license.

The Sampling license was on one hand very restrictive — it did not permit any verbatim distribution — a CC license that did not permit simple sharing(!) — but on the other hand, permitted commercial use of licensed works, provided they were used transformatively. In theory, such a license could be very good for the commons. It might encourage conservative entities to license some works in a way that would not sanction their bugaboos such as P2P filesharing, but could ultimately be incorporated into free works through remixing.

Sampling was never widely used, perhaps because lack of allowing verbatim sharing just broke too many use cases — including CC’s. When WIRED did its magnificent issue on CC, featuring prominent artists using the new license to promote remix, not being able to share the verbatim originals would have made a site like ccMixter (launched with the issue) rather unwieldy. So CC created the Sampling+ license, the plus noting that it added permission to share verbatim copies.

However, this process resulted in one of the oddities that made it very hard to remember how Sampling+ worked: it only allowed non-commercial verbatim sharing, but at the same time, it allowed commercial use if transformative. This is one instance in which CC’s practice of developing a simple machine-readable description of its licenses alerted us that something was amiss. The flat CC REL statements permits Distribution and prohibits CommercialUse would not be adequate for describing Sampling+. We were forced to define a new permission, Sharing, which we defined as non-commercial distribution. This allowed us to say Sampling+ permits DerivativeWorks and leave out prohibits CommercialUse, which would be too broad. This exercise wasn’t enough to stop Sampling+, but it did highlight another (in addition to helping computers facilitate discovery and use of licensed works) use case for machine-readable license descriptions — informing the development of licenses (and other legal tools; such an exercise was helpful in defining the scope of the Public Domain Mark) themselves.

Some of the artists (or their management) involved in the WIRED CD did not want to permit any sort of commercial use, thus we created the NonCommercial-Sampling+ license. The WIRED CD and issue and launch of ccMixter were each huge successes and major milestones for CC. However, the Sampling licenses themselves proved to be a nearly instant “legacy” problem. In 2005 ccMixter discouraged their use in favor of CC Attribution and Attribution-NonCommercial and as the interview above shows, Freesound knew that was the right move almost immediately as well. Please read Victor Stone’s delightful ccMixter memoir for a history of that project, including licensing.

For completeness, it’s worth noting a couple other problems the Sampling licenses had, in addition to Sampling’s not allowing verbatim sharing (the reason it was retired in 2007) and Sampling+’s hard to remember commercial/non-commercial mix.

All of the Sampling licenses only allow adaptations that make “partial” and “highly transformative” uses of the original. This caused three sub-problems: (1) for some short works, samples on Freesound in particular, “highly transformative” and (especially) “partial” use potentially severely limits natural uses of the works; (2) these conditions are fairly open to interpretation — had any of the Sampling licenses been very popular, “what is transformative/partial” would be another consuming question, a la non-commercial; and (3) it is not clear just how much the Sampling licenses permitted beyond what one can (or at least ought be able to) do based on copyright exceptions and limitations such as fair use.

Finally, the Sampling and Sampling+ licenses also have a complete prohibition on advertising and promotional use (except for promoting the work and artist themselves), which resulted in four sub-problems: (1) prohibition of such a broad class of uses greatly limits the value of the commercial use permission, and considering “promotional”, even many otherwise non-commercial uses; (2) what constitutes advertising or promotion?; (3) limitation to non-promotional uses accentuates the question above about what is permitted above and beyond default exceptions and limitations; and (4) the Sampling and Sampling+ licenses are not compatible with any of the 6 main CC licenses — one can’t incorporate a work under Sampling or Sampling+ into a work distributed under one of the 6 main CC licenses, as none of them, even those with the NonCommercial term have a complete prohibition on advertising, let alone all promotional uses.

Obviously CC has become much more focused on interoperability since its beginning — we have released no new niche licenses since 2004, and as of today, have retired all of those. Version 4.0 of the main CC licenses will present another opportunity to take a hard look at interoperability, and fix any rough edges we might find, with your help. If you’re interested, please join the discussion virtually or at its kickoff later this month in Warsaw.

If you’ve read this far, now take a break and check out Freesound 2.0.