The Creative Commons Attribution-ShareAlike 3.0 Unported license (BY-SA) has been enforced by a judicial injunction in Germany. Legal analysis will be added to our case law database in the coming days. Till Jaeger reported the case (in German; English machine translation) at ifrOSS (Institut für Rechtsfragen der Freien und Open Source Software), where one may also find a PDF scan of the ruling. John Hendrik Weitzmann of CC Germany has provided an English translation of the ruling, below. 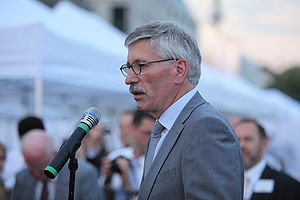 Additionally, we have been permitted to reveal that the defendant was a far-right party. This is somewhat ironic, given that an occasional objection to using a CC license is that one’s work could be exploited by Nazis (or other extremely objectionable parties). Of course the defendants could have correctly complied with the license (if they were smart and diligent enough), but then CC licenses contain further protections for reputation and integrity.

The photographer and plaintiff, Nina Gerlach, is an active editor of German Wikipedia and other Wikimedia projects (all of which use BY-SA as their default license), and a member of Wikimedia Germany, where her spouse, Mathias Schindler is employed. The case was handled by Till Jaeger (who wrote about the case at ifrOSS, see above), a partner at the law firm JBB and a widely recognized expert in open licenses.

Gerlach said “I wanted to support the concept of free licenses that give permission for everybody to use content but come with a set of requirements, such as attribution.” She will donate any damages awarded by the court if there is money left in the end, and has already donated 100 euro to a project that created public domain and freely licensed songbooks for kindergartens.

Creative Commons is once again pleased that among millions of uses of its licenses, the courts are rarely involved — the licenses allow licensors and licensees to easily avoid transaction costs, let alone the costs of court. We are equally pleased that when a case involving a CC license is taken to court, whether to uphold the rights of the licensor (as in this case) or the licensee, that courts have held that the licenses are enforceable copyright licenses as one would expect.

ZPO is the civil proceedings act,
UrhG is the Urheberrechtsgesetz (copyright act),
BGH is the Federal Supreme Court,
KG is the Berlin Supreme Court,
GRUR, NJW and WRP are journals,
to “credibly show” something is roughly to establish prima facie evidence.

In the preliminary injunction matter

the …
represented by its chairman
Defendant,

it is commanded by way of preliminary injunction, due to special exigency without oral hearing, according to s. 935 ff., 91 ZPO:

1. The Defendant is, in order to avoid a penalty to be ordained by the Court for every case of non-compliance of up to 250.000,00 EUR, alternatively arrest for disobedience to court orders, or an arrest of up to six months, the latter to be executed in the person of the party chairman, prohibited, to reproduce and/or make publicly available the following photo without naming the creator and adding the license text or its full internet address corresponding to the license terms of the Creative Commons license “Attribution ShareAlike 3.0 Unported”:

2. The Defendant has to bear the costs of the proceedings.

I.
The Applicant has credibly shown the following:

She has created the photo mentioned in the decision and released it for further use under the terms of the so-called Creative Commons license “Attribution ShareAlike 3.0 Unported”. According to these terms, in case of use the creator must be named and there must be either a copy of the license text attached or the full internet address in the form of the Uniform Resource Identifier must be provided. The Defendant published the photo on its website under the address www.die-rechte.info without giving the aforementioned information. The applicant first took notice of the publication on September 9th 2010.

II.
This triggers the urgent entitlement to injunctive relief according to s. 97 ss. 1 in combination with s. 19a UrhG.

The risk of recurrent infringement as a prerequisite for the entitlement follows from the occurrence of the breach; the risk could have been dispelled only by a declaration under penalty of law to cease and desist (BGH GRUR 1985, 155, 156 = NJW 1985, 191, 191 – Penalty up to … ! – mentioning further sources).

A preliminary ruling seems also “necessary” in the meaning of s. 940 ZPO, because the Applicant cannot be expected to tolerate a possible further infringement of her rights until main proceedings are run.