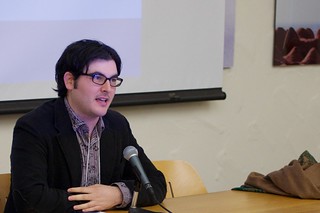 Video artist and activist David Evan Harris sees sharing as a key component of his work. “The fact that we use Creative Commons licenses to guarantee that our work is in the commons is an essential ingredient in the production itself,” he told me. “It communicates something to our volunteers and people who work with us. It communicates that it isn’t about enriching one person, and it’s not about producing a proprietary work that only a few people will see.”

David is the founder and executive director of the Global Lives project, an organization that produces videos documenting the lives of people around the world. The project’s first undertaking consists of ten videos – each following one person for 24 hours, with no cuts. Global Lives presents the videos in the form of gallery exhibitions, with the ten videos playing simultaneously. In essence, the visitor is creating her own remix of all ten videos by choosing what to watch as she wanders through the exhibition (if you were at the CC10 celebration in San Francisco, you got a taste of the exhibition on the fourth floor).

But Global Lives isn’t just a gallery exhibition: the videos are available online as complete, uncompressed downloads. Nor is it just art. Lately, in fact, David’s been most interested in its potential in the education world. 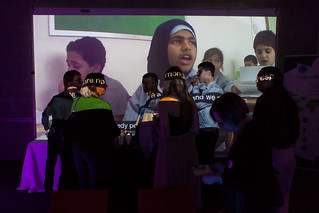 Part of what’s striking about Global Lives is the possibilities for use that go far beyond its original context. Global Lives videos have been used by educators all around the world, some of whom have even gone so far as to create their own cuts of Global Lives videos to demonstrate certain ideas to their students – a video of all ten subjects eating breakfast, for example, or coming home from work. Peace Corps volunteers have used Global Lives videos as training before leaving on assignments. “One of our translators is a Malawian who lives in the UK, and she shows the Malawi video to her daughter as a bedtime story, so her daughter can get an idea of what it would be like to grow up in Malawi.”

Talking with David, his excitement about these uses is contagious. He showed me a mock up of a site redesign that he and his team are working on. In the new Global Lives site, users will be able to watch multiple videos at once, leave timestamped comments, and even create and share their own mixes of Global Lives content. It’s amazing to see so many possibilities for sharing and reuse grow out of a simple idea – that watching how people live helps you understand them.

Global Lives is now gearing up for a second set of videos – this one called Lives in Transit and focusing on the lives of people who work in transportation – and asking for donations through Kickstarter.