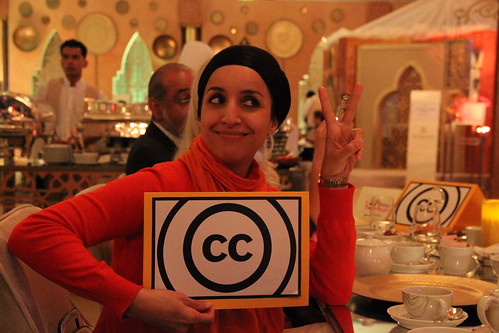 For the fourth consecutive year, Creative Commons communities in the Arab world have self-organized and hosted CC Iftars to celebrate the Muslim holy month of Ramadan in the spirit of sharing.

Back in 2010, CC Iftars were created as community-organized gatherings where CC members and people interested in the sharing culture would meet up to celebrate together the breaking of the fast, and share food and creative ideas. During the past four years, CC communities in Egypt, Jordan, the UAE, Syria, Morocco, Iraq, Lebanon, Qatar, and Tunisia have actively contributed to the iftar project by hosting community events, screening movies, featuring talks, charity marathons, and remixing competitions.

This Ramadan 2013, CC Iftars where organized in Qatar, Iraq, Lebanon, and Jordan. CC Iftar Doha kicked off in the Qatari capital on 23 July in a magnificent Ramadan tent at the St. Regis hotel. A very diverse community made up of technologists, graphic designers, entrepreneurs and photographers, who all share an interest in growing digital Arabic content, attended the gathering and donated the proceeds of the evening to the orphans in Qatar.

Despite the deteriorating security situation, the CC community in Iraq was able to celebrate CC Iftars for the second year. This time, the event was not only hosted in the capital Baghdad, but also in Kirkuk, Dhi Qar, Sulaymaniyah, and al-Diwaniyyah. The lively and brave group behind the Iraqi Network for Social Media – who are very active in organizing open-culture–related activities – has managed to put together around a hundred people in these five cities all across the country, and celebrate the spirit of sharing by screening movies and hosting a brainstorming session about new ideas and projects as well as a ceremony to remember Iraqi orphans. The events were simultaneously held on 27 July and they were attended by people with a wide range of professional backgrounds, spanning from bloggers and journalists to photographers and artists.

On 31 July, it was Lebanon’s turn to host its CC Iftar for the second time. The event was held in the brand new multi-purpose space of Alt City in Hamra district, Beirut. The community gathered to celebrate the accomplishments of CC Lebanon – which has been a formal affiliate since 2010 – and discuss new ideas to improve the culture of sharing in the country through artistic and creative projects. 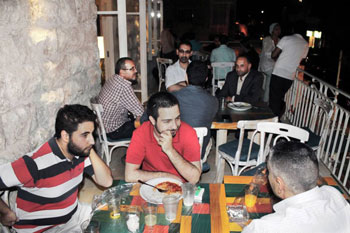 Last but not least, CC Jordan, one of the oldest CC affiliates in the Arab region, celebrated on 6 August its second CC Iftar in Amman. The gathering was hosted in the beautiful location of Fann wa Chai in the historical district of Jabal Lweibdeh. Jordan Open Source Association, who has been an active promoter of CC and the sharing culture, was behind the organization of the CC Iftar which gathered open-source lovers, geeks, bloggers, and digital activists.

As in previous years, CC Iftars have proven to be a great opportunity to host community-driven discussions and feature new ideas and projects. They have also showed the enthusiasm and self-organization skills of CC Arab communities, even in such difficult times of political and social unrest.

This year, too, our thoughts go to Bassel Khartabil aka Bassel Safadi, CC Syria public lead, who has been detained without trial by Syrian authorities since 15 March 2012. Bassel was behind the idea of launching CC Iftars in the Arab world and he is greatly missed by his family, friends, and the entire CC community.