The guest post below was written by Erik Moeller from Passionate Voices, in support of our campaign “Made with Creative Commons: A book on open business models” which will present in-depth profiles of Creative Commons use.

The dragoncow is chewing on an uprooted tree, its bulging eyes staring vacantly into the distance as the orange cat hanging off its udder extracts a large drop of milk into a wooden bucket held by a young witch balanced precariously on her broomstick. The scene is from David Revoy’s Pepper & Carrot, a much-loved comic strip about a witch and her cat.

Unlike most webcomics, which release new strips a few times per week, there’s typically one episode of Pepper & Carrot every month. Each episode is several pages long, crafted with an attention to detail rarely seen outside more commercial work. Slowly but surely, David is building Pepper’s identity and the world she inhabits. “So much heart in each and every piece you do”, writes one admirer in the comments.

Volunteers translate each episode to a dozen or so languages, on the basis of the source files which can be downloaded freely. David uses a GitHub repository to collaborate with the community and to share assets.

All this is possible because the entire comic strip is licensed under the Creative Commons Attribution License (CC-BY). Other than CC0, this is the most permissive licensing option Creative Commons offers. Works under these terms can not only be copied, but also remixed and built upon, including for commercial uses. Re-users just have to attribute David Revoy as the author.
David is no stranger to Creative Commons. He was art director for Sintel, a crowdfunded CC-BY licensed 3D animated movie produced by the Blender Foundation. His love for open source goes back even further, as he explained in a recent interview with Passionate Voices: “Even when I was using Windows and proprietary software, I always kept an eye on the Linux distributions. I always kept an eye on GIMP. It was one of my first digital painting tools. And I always really appreciated the whole movement.” Today, David uses Krita, an open source digital painting application which has been supported by two Kickstarter fundraisers. 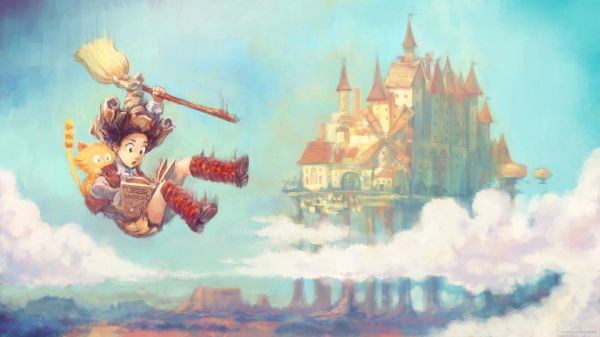 User Manual by David Revoy, available under the CC-BY license.

David’s work on Pepper & Carrot is funded by a Patreon campaign. As of this writing, for every episode he produces, his supporters donate $1200, which is inching ever closer to the amount David needs to focus fully on creating the webcomic as his “dream job”. As such, he is not concerned about others building on his work as long as they attribute him for it: “I’m really happy if Pepper & Carrot can bring more money for external people.”  David is disappointed when people fail to meet the simple requirement to credit him as the author: “It’s easier to respect something that was given for free, in my opinion.”

Back in May, a Kickstarter campaign launched without David Revoy’s involvement to create a printed version of Pepper & Carrot. The initial version of the campaign suffered from attribution issues: “The author of the Kickstarter, in the description of his crowdfunding page, was acting like he was the creator. He was quoting my name but he was acting like it was my Kickstarter page, and it was really not visible inside the page.“ After David contacted the campaign creator, the attribution issues were fixed, and David tweeted in support of the campaign. In the end, $6,837 were raised towards a print edition which otherwise would not have happened.

Although David recognizes the power of the CC-BY license, there are circumstances where he uses more restrictive licensing. The Yin and Yang of World Hunger, a powerful painting which depicts the disparity between rich and poor, is licensed under the Creative Commons Attribution NonCommercial No-Derivatives license, because David doesn’t want to see it used for commercial or political purposes without his approval. The license doesn’t preclude him from selectively granting those permissions:  “There are plenty of associations about hunger that use this illustration, and I’m really happy to give them the illustration for free.”

David’s long term vision is to create an animation studio which only produces works under a free license. With his growing base of supporters, his vision is audacious but not outlandish. Today, many creators of webcomics and YouTube channels are funding their work through their fanbase, whether it’s through one-off campaigns or ongoing Patreon-style support. But relatively few use a Creative Commons license, and fewer still the very permissive CC-BY license alongside an open source toolchain.

When confronted with commercial use and unwanted derivatives, creators may be tempted to to default to a license that places limits on re-use, and as David’s story demonstrates, this can be a good answer, especially when dealing with sensitive works. And yet, there’s always the tantalizing question: What if? What if you let go, what if you set your work truly free? What if you push the limits of what’s possible with open source software?

Artists like David are experimenting with permissive licensing options and open source production methods to create a free culture with no strings attached. Fan support through crowdfunding platforms gives them the ability to do so without fearing loss of income.  You can find my full interview with David Revoy (and with other pioneers) on Passionate Voices, and of course you can read Pepper & Carrot online and join David’s community of supporters.