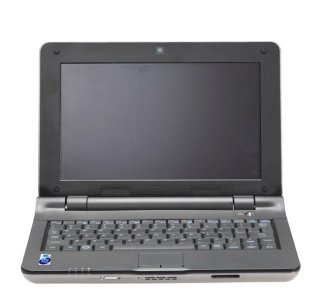 Today VIA launched their OpenBook, an innovative subnotebook platform. You can buy it now and also download the raw CAD files released under a Creative Commons Attribution ShareaAlike 3.0 license, meaning you can get the raw machine files to make whatever case or version you want, as long as you release your modifications under the same license and give attribution back to VIA. The VIA press release today states:

The VIA OpenBook mini-note reference design introduces a host of new innovations, including the next generation of VIA Ultra Mobile Platform, based on the VIA C7®-M ULV processor and the new all-in-one VIA VX800 digital media IGP chipset. Together, this ultra compact, power efficient platform delivers richer computing and multimedia features, including a stunning 8.9” screen and greater video playback support, in a compact and stylish clamshell form factor that weighs just 1kg.

The VIA OpenBook features a flexible internal interface for high-speed broadband wireless connectivity that provides customers with the ability to select from a choice of WiMAX™, HSDPA and EV-DO/W-CDMA modules appropriate to their market. In addition, under a unique collaborative approach, the CAD files of the external panels of the reference design are offered for download under a Creative Commons Attribution Share Alike 3.0 license to give customers such as OEMs, system integrators, and broadband service providers greater freedom in tailoring the look and feel of their device to meet the diverse needs of their target markets.

And, some blogs are praising its coolness like what crunchgear had to say (which hints at business strategy of companies like VIA):

Do you own a small fabricating plant in Taiwan? Do you have an engineering team of ten PhDs? Do you want to make small laptops? Has VIA got a deal for you. The VIA OpenBook reference design is not actually a product — it’s more of an idea. Because it is ostensibly open (the CAD plans are available on the VIAOpenBook site) you simply buy the chips from VIA and use the plans to build your own cases, keyboards, and I/O systems.

Here is my quote about the release 🙂

“VIA is a forward thinking company that has realized that sharing enables a healthy ecosystem which helps them provide an innovative product which supports their core business,” commented Jon Phillips, Business and Community Manager for Creative Commons. ﻿”Making the actual raw CAD files available under a ﻿Creative Commons Attribution ShareAlike 3.0 license is a brilliant first step that clearly and legally allows others to emergently build upon VIA’s open innovation.”

I’ll add that this is a very interesting project that ups the “Open” ante of the ASUS EeePC’s involvement in free and open culture beyond the software that ships on the platform, it competes strongly against the One Laptop Per Child XO-1, and the Intel Classmate, which are the predecessors of this generation of subnotebook. In fact, it appears that chip companies are realizing that in order to sell more chips, it is good to give away some parts of a product for free, or ship a free operating system which further reduces the cost barrier to selling more silicon. As an aside, this also mirrors what Nine Inch Nails did by releasing part of their product as an entry into more specific and special packages.

It should also be noted that this valiant efforts follows up the great work that FIC’s Openmoko, Open Source Cellphone, did by releasing their CAD designs, which has already led to multiple efforts to create different cases and a great set of community pages on howto get your designs manufactured. Also, we worked with Keith Packard at Intel to release some specifications of graphics chips by Intel around the same time, which has helped for more companies to realize this same level of openness, and more importantly has allowed for developers, other companies, and people to more easily support and buy more Intel chips.

If you have a product similar to the above, or something you think could benefit from Creative Commons licensing in this way, please do contact me (Jon Phillips), contact us, or comment on this post. Let’s *open* it up.