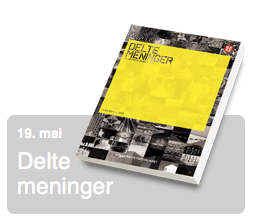 Today, Norway’s Minister of Government Administration and Reform, Heidi Grande Røys, launched a new book, edited by the Minister, about sharing and the social side of computer networks.  The book is titled “Delte  meninger” (in Norwegian this has the dual meaning of “shared  opinions” and “conflicting opinions”). There is also a website dedicated to open, public debate about the issues raised in the book.

Both the website and the print edition will carry a ported Norwegian CC BY-SA 3.0 license.

The print edition of the book will be published by Universitetsforlaget and is the first instance of a major book in Norway that carries a Creative Commons license.