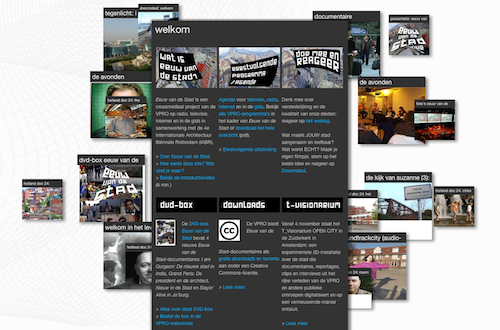 Paul Keller, one of our project leads for CC Netherlands just let us know about an exciting development from their public broadcaster, VPRO, who on Wednesday released 2 full length (and one more coming soon) documentaries under our CC-BY-NC-SA licenses. What’s great is that these documentaries are current pieces, not old selections from the back catalog or archives – they’ve all aired within the last 10 days. Additionally, VPRO is also offering DVDs of the films for sale.

The documentaries, available in both Dutch and English are available to download in an almost-HD resolution of 640 by 380, but are also posted on mininova.org here and here.

Here’s an excerpt from the project’s press release:

According to Bregtje van der Haak, coordinator of the VPRO’s Century of the City project, releasing these documentaries under a Creative Commons license contributes to efforts to better serve the VPRO’s public:

“We are producing a lot of documentaries that are of interest to specialized communities. In the case of urbanization this includes architects, urban planners and students. From research we know that a growing segment of the VPRO’s audience is watching less and less television but continues to highly value this type of content. By offering content for download we are increasing the life cycle of these programs and enable a whole number of new forms of re-use of our productions. As a public broadcaster we have the obligation to make our productions available to the public in an as flexible manner as possible.”