Slightly less than a year ago the count of CC-licensed images at Flickr surpassed 100 million. Over 35 million have been added since then. Now is a good time to look at changes over the last four years (for which we have data), in particular changes in the distribution of licenses used. We’ve heard many anecdotes about photographers switching to more liberal licensing after getting comfortable with and experiencing the benefits of limited sharing, and wanting more. Are these anecdotes borne out in aggregate?

First, the overwhelming trend is simply more CC-licensed images — an increase from 10 million to 135 million over four years — and we amusingly said 5 years ago that Flickr’s CC area had “gone way beyond our expectations” with 1.5 million licensed images. 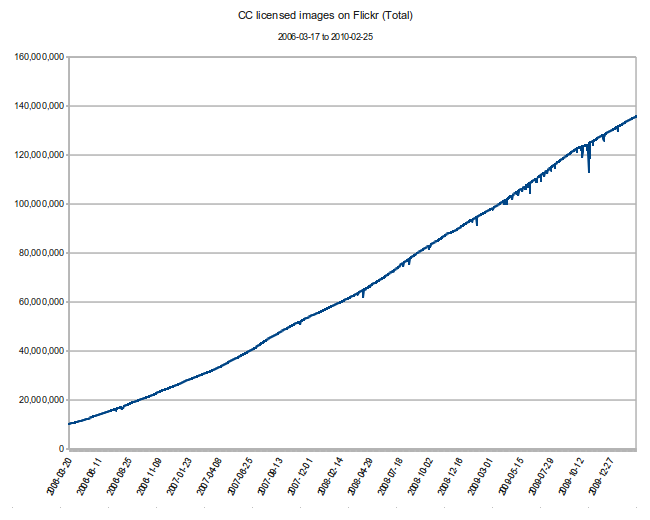 The following table summarizes changes in CC licensed images over the past four years. With over 10-fold growth, use of all licenses have increased greatly. However, the distribution has also changed, though slowly. Four years ago 78% of CC-licensed images on Flickr were not pre-cleared for commercial use. This has declined by close to 5 percentage points.

﻿
Another way to look at change in license distribution is the share of licenses that permit both commercial use and derivative works — licenses that meet the requirements of the definition of free cultural works, a test used, for example, by Wikimedia Commons, the image and other media repository for Wikipedia. The graph below shows this share over the past four years. 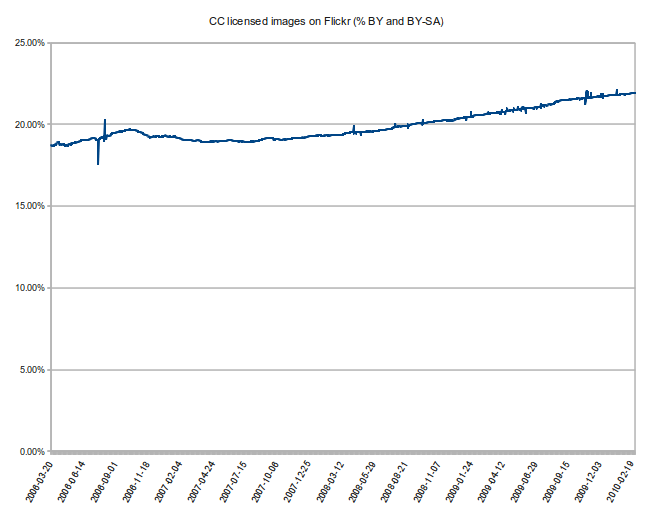 A slightly different approach which reveals the same overall trend is to rank licenses according to the permissions they grant and assign an overall “freedom score” based on the mix of licenses used (a higher score means more permissions are granted on average). This approach was developed by Giorgos Cheliotis in a paper looking at the adoption CC ported jurisdiction licenses (pdf). The following graph shows the “freedom score” of the mix of licenses used at Flickr over the past four years. 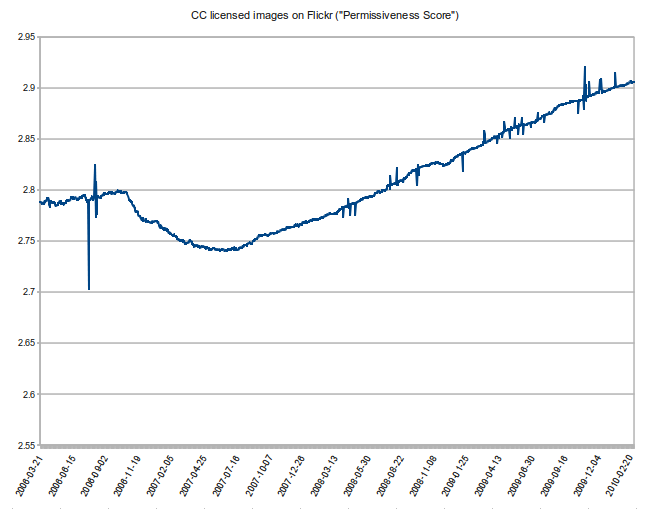 What are the underlying causes of these trends? The CC licensing interface on Flickr has not changed significantly, presumably borne out by steady growth of CC licensed images over the years. What is causing the slow increase in permissiveness of those posting images on Flickr under CC licenses? Even more curiously, what caused their temporary decrease in permissiveness from the fall of 2006 through the spring of 2007?

Perhaps the steady increase in permissiveness since then has something to do with Wikimedia Commons’ success and its coming to the attention of photographers as an important publicity mechanism — recalling that Wikimedia Commons requires liberal licensing. However, this is mere conjecture. Can you think of other possible causes and more importantly means to analyze the impact of possible causes?

The data behind the above graphs is available as a regularly updated MySQL database dump as well as a spreadsheet snapshot (for Open Office) for 2006-present.

While the data for CC adoption on the web at large is much less certain than that for a single site such as Flickr, some indicate that both total use and permissiveness have increased much more on the web at large than on Flickr alone. Look for a post on this in the next month.

If these questions interest you, have at the data, discuss with others — and note that Creative Commons has an opening for a metrics engineer.

This research was assisted by a grant from the Necessary Knowledge for a Democratic Public Sphere Program of the Social Science Research Council with funds provided by the Ford Foundation.