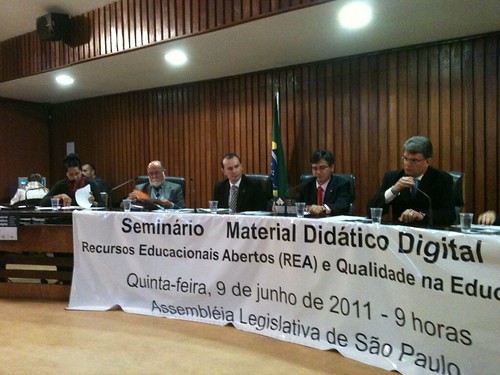 There’s been some exciting announcements in support of open educational resources (OER) in Brazil over the last few weeks.

First, legislation was introduced into Brazil’s House of Representatives. The bill deals with three main issues: It 1) requires government funded educational resources to be made widely available to the public under an open license, 2) clarifies that resources produced by public servants under his/her official capacities should be open educational resources (or otherwise released under an open access framework), and 3) urges the government to support open federated systems for the distribution and archiving of OER. Last week in São Paulo, a group of educators, journalists, policymakers, activists, and OER experts held an event at the Legislative Assembly to discuss open education projects and promote OER policies. In addition to this federal legislation, a similar bill will be introduced at the São Paulo state level.

Second, the municipality of São Paulo Department of Education has now mandated that all its educational and pedagogical content will be made available under the Creative Commons Attribution NonCommercial Share-Alike (BY-NC-SA) license. From the translated announcement:

“We didn’t have an appropriate way to license our content”, says Alexandre Schneider, Secretary of Education. “We hold the rights to our content because we created it, and we realized it would be right to release it under a license that allows everyone to use and adapt what was created with public money.”

Congratulations to the REA-Brasil (OER-Brazil) team on these recent successes and ongoing commitment to supporting open education in Brazil.