Creative Commons staff, affiliates, and supporters were active participants and contributors at this year’s Mozilla Festival, which has become an annual rallying point for the Open Web and our shared values. Our sessions covered a wide range of issues, from new technology, to open education and science, to working as an open organization. Thanks to Mozilla for inviting us. We’re already looking forward to next year’s event. 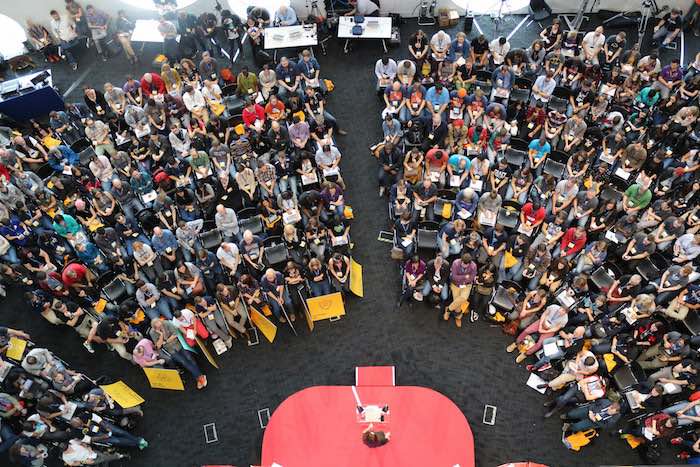 by Matt Lee and Ryan Merkley

In CC makes tools for makers, CC’s Ryan Merkley and Matt Lee joined Mozilla dev Ali Al Dallal to talk about tools and technology solutions that could enhance the reach and value of CC-licensed works. CC shared some early screens for The List, a new mobile app that allows anyone to create and share a list of wanted images, and allows users to respond by taking pictures and sharing them in a global archive, all licensed CC BY. CC also shared CC Search, which will aggregate results from publicly-facing search APIs of openly licensed works. Ali demoed a prototype of MakeDrive, which will allow a user to search for a CC image, then grab it into their own local synced storage.

Participants broke into smaller groups to discuss challenges and opportunities, and identified solutions that were shared back with the group. Issues ranged from UX and usability needs to opportunities for monetization. Everyone was encouraged to join The List mailing list at creativecommons.org/thelist for updates, and to head to hackspace.cc to join the development process and contribute.

Portrait of a Creative Commons Artist 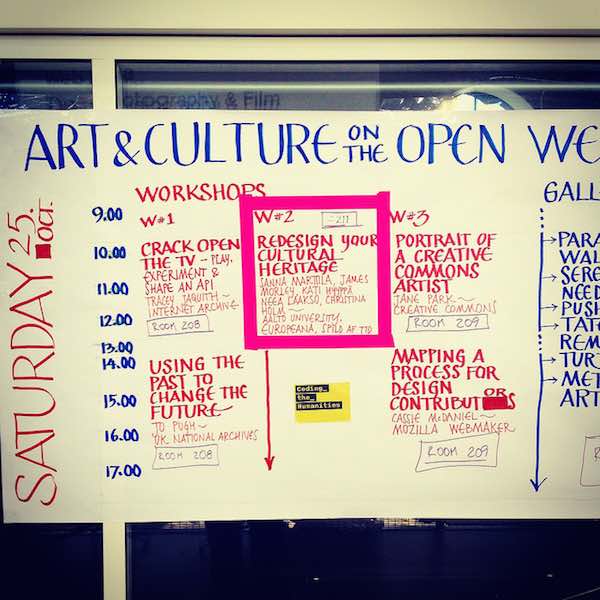 In Portrait of a Creative Commons Artist, a group of musicians, filmmakers, museum curators, and arts education practitioners gathered to discuss the kinds of art being created in today’s digital landscape and how and why they share their artworks and the artworks of others. Surprisingly, or unsurprisingly, the artists’ motivations for sharing included no commercial goals. Motivations cited included wider distribution; to grow a community of like-minded artists; to elicit feedback or emotion; and result in new inferences and ways of thinking.

We also identified barriers to sharing in certain environments, such as child privacy in arts education and the time-consuming effort involved in cataloging artworks for museums. We addressed individual artists’ hang-ups to sharing, such as fear of plagiarism and not being quite ready or confident in the quality of one’s art to open it up for public criticism. Lastly, we brainstormed potential solutions to overcoming these barriers and help artists feel more comfortable with sharing their works online under more liberal re-use terms, such as Creative Commons licenses. Such solutions included: a tool that could display a canonical representation of your work, including all derivatives made from the original; a better attribution prompt enabling artists to specify exactly how they want to be attributed; and a registry of artworks in the commons. Additional needs included improved interaction design with artworks online, consulting or advisement on how to share such networked art, and simplified best practices around sharing and attributing open artworks. Full agenda and notes from the session are available, in addition to Kevin’s coverage of the session in The Open Standard, “The Plight of the Open-Source Artist” — which is aptly licensed under CC BY-SA.

This session affirmed and informed our intentions with several CC projects in development, such as a registry of CC-licensed works, a smart phone application that would make it easier for photo contributions to the commons (The List), and the Free Culture Trust, a coalition of organizations that would offer comprehensive services to artists wanting to donate their art to the commons.

In Mapping #SchoolofOpen and #TeachtheWeb to places, community members from Creative Commons, School of Open, and Mozilla Webmaker came together to physically map their open web education programs, such as Maker Party and the recent School of Open Africa launch. We “hacked” a map of the world by creating our own version of it, and most interestingly, Africa was front and center with the U.S. largely as an afterthought. After mapping, we self-organized into two streams: those leading open web education for adults and those leading open web education for kids and teens. After much discussion, we are now planning to better bridge our communities to increase our impact in several regions, including Africa, India, and the U.S. We will be creating a digital version of our Hack the Map activity, allowing others to add themselves virtually over time, and also planning a joint School of Open and Mozilla Webmaker event with our communities for 2015.

In OpenMe – Kids can Open, a few of us from the CC, School of Open and National Writing Project communities gathered to discuss current efforts around CC and open web education for kids and strategies for replicating those efforts in other jurisdictions. Kelsey Wiens, CC South Africa public lead and School of Open program lead for CC4Kids, shared her experience with piloting CC4Kids in schools. Generally, starting with private schools resulted in more favorable results, in addition to partnering with existing organizations with strong ties to schools, such as Innovate South Africa’s Code4ct. We are now in conversation to pilot the CC4Kids model in the U.S. with the National Writing Project’s Educator/Innovator network. To start, we will be hosting a webinar as well as sharing a call to the network for after school pilot participants.

Walking the talk – How to work open

In Walking the talk – How to work open, CC facilitated the strand on Partnerships and collaboration, or how to better work together as open organizations with overlapping missions and projects. How do we not reinvent the wheel and collectively have greater impact? Part of the solution lies in better communications and transparent organizational practices, but how do we translate these needs into an action item? We brainstormed several “best case scenarios” and in the end came up with a strong list of concrete solutions, with an Annual Capacity Building Conference for open organizations at the top of the list. Such a conference would focus specifically on knowledge sharing for the purpose of building capacity within and outside of our organizations to achieve our missions and realizing our vision for universal access to research and education and full participation in culture. Other ideas included:

Complete notes from the session are available, in addition to results from the Community Building track of which this session was a part. The wranglers for the track are now working on a community building toolkit and will be rallying all organizational representatives in the next few months to make one of the above ideas into a reality. We vote for the Annual Capacity Building Conference of open orgs! 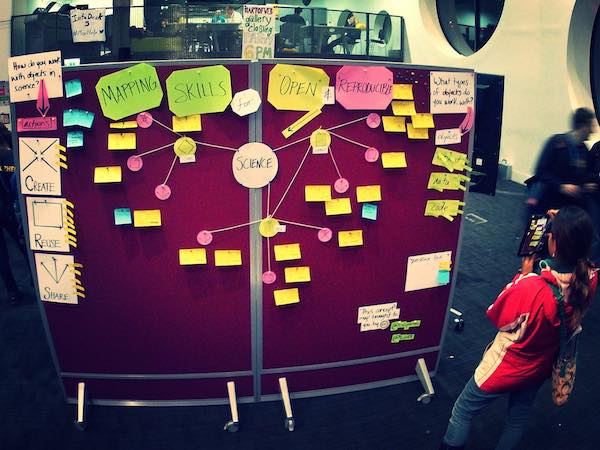 In the Skills and Curriculum Mapping for Open Science session, facilitators and participants on Mozilla Science Lab’s “Science on the Web” track came together to build a map linking together the many nouns and verbs that describe interactions between people and scientific research, all of which are connected the Commons. An underlying focus of the session was to identify the ways scientists and citizens interact with outputs of research including content, data and code.

Taking a simplified approach to mapping these nodes will lend to the ability of others to expand on the map, and to translate the nodes into learning objectives that can be included in education and training programs around open and reproducible science. Over the two days of the festival, we facilitated the mapping of outputs and interaction types, aiming to capture key statements that describe the way scientific artifacts are created, reused/remixed, and shared. We welcomed scientists and non-scientists alike to stop by and critique the map as it was constructed, and to add nodes or connections where they felt something was missing. Did you ever once produce a dataset for your research blog? Then you’ve created data! Have you ever downloaded an Open Access research paper? If you have, then you’ve reused content! Have you ever uploaded a script to Github? Then you’ve shared code! It’s easy to drop most interactions people have with science into these buckets once we take a step back, and simplify the statements around what we do with scientific content and code in the Commons.

To allow others to build on the skills mapping done at Mozfest this year, a digital version of the map has been uploaded to Github , and is open for anyone to revise, tweak, and add to as they wish. Plans to expand this work include a full build out of high-level learning objectives, and alignment to existing Open Educational Resources in science training programs. A number of universities have expressed interest in piloting an undergraduate or graduate-level course on open and reproducible science, and the idea is that this map will be useful when developing such a course, revealing how and where skills learned in such a course apply to the way we work with content and code in the Commons.