In March we hosted the second Institute for Open Leadership. In our summary of the event we mentioned that the Institute fellows would be taking turns to write about their open policy projects. This week’s post is from Fiona MacAlister, OER Specialist at Wits University in Johannesburg, South Africa.

I was privileged to attend the second Institute for Open Leadership (IOL2), held in Cape Town, in March of this year. It was an amazing experience, during which I worked with various mentors and a small group of fellow open colleagues from around the world. One of the plusses of the Institute was hearing about the challenges that everyone faced and how they had gone about, or were going about overcoming them albeit, in some cases, with what many would consider relatively small wins. That, however, is the nature of the OER world. Lots of small wins are what ultimately lead to the big wins. 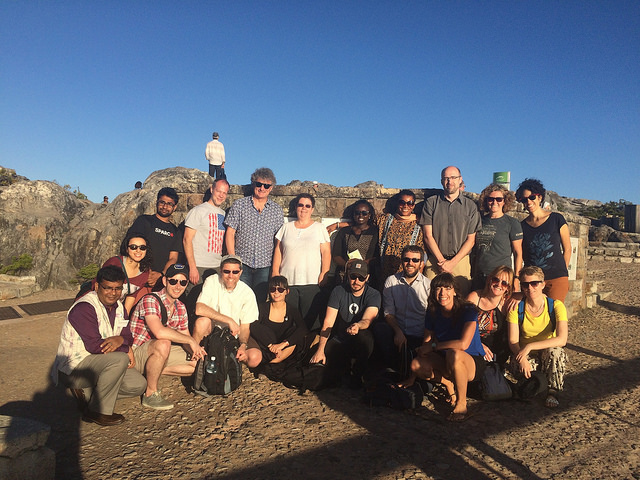 IOL Fellows atop Table Mountain, by bella_velo, CC BY 2.0

One issue that emerged is that there are no quick fixes when it comes to promoting the concept of open educational resources (OER). Tertiary institutions are a particularly difficult nut to crack, as the concept of knowledge sharing is not a popular one in what is, more often than not, an environment in which research ideas are cultivated and jealously guarded in the safe spaces of minds and offices. Not surprisingly, this does not make for fertile ground in which to plant the idea of knowledge sharing, but we persevere.

The fact that the OER movement has not quite taken off has been a cause of frustration for many of us for some time now. To those of us involved in the movement, the benefits of sharing would appear be a ‘no brainer’. However, over the course of my time as an OER Specialist at my current institution, I have had time to reflect on why the concept of OER is such a difficult one to communicate, even on a basic level.

To put things into perspective: We are on the brink of finalizing a joint Open Access/Open Educational Resources policy. We have been working on an internal online OER course and a booklet on Creative Commons licensing and OER, both of which will soon be released. We are also currently in the process of developing a range of courses together with the Office of Student Support in the Faculty of Health Sciences, which are intended to support the first year experience and will be released with an open license. I should be elated by these wins but, in my opinion, the impetus created by them will be difficult to maintain without a larger mindset change—that goes well beyond the reach of our current two-year project.

Many people become rather uncomfortable when you start to talk about openness in this somewhat esoteric vein, which is why I suspect so many OER projects are expected to produce facts, stats, quantity and research. What I think mitigates against the full success of projects which use this sort of approach, and structure, is that the concept of openness is not, at its heart, a purely quantitative or researchable one. True openness, and a willingness to share, will not flourish in an environment that is dominated, primarily, by a production line or microscopic analysis. It seems to me that we have become too cautious about addressing the real face of openness which is, in essence, an altruistic project which should ultimately benefit the world at large. In my opinion, it is the main reason why so many open initiatives disappear into the ether once the funding dries up. We have lost sight of the real spirit of the open movement because we are reluctant to admit that it doesn’t lend itself readily to the commercial, quantitative structures of our world.

We have been conditioned to believe that by being truly open to the world and people around us that we will lose something of ourselves and gain nothing in return. In some circumstances this may be true but, in reality, the world will gain something from us and something of our unique perspective on the world. All of us have knowledge to share, openly and freely, that will be of benefit to others and that can be repurposed in a way that will communicate that benefit across a range of cultures.

Openness and trust go hand-in-glove. Trust can only come from a willingness to share which, in the final analysis, stems from a concern for the common good. It really is as simple as that. That, in my opinion, is the foundation upon which the future of the open movement lies. If we don’t come from that starting point, we will remain trapped in theoretical frameworks, and the initial impetus of the movement will eventually be relegated to the world of academic research. Is that something we really want, or do we still believe that the open movement will ultimately be of benefit to the world at large?