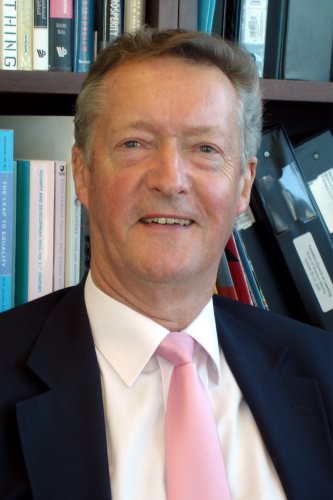 Sir John Daniel has been working in open education from its earliest days. “Openness is in my genes,” he says. Sir John is President and CEO of the Commonwealth of Learning, or COL. COL is an intergovernmental organization comprised of 54 member states. The overarching focus area for COL is “learning for development.” It aims to help its member nations—especially developing countries—use technology and develop new approaches to expand and approve learning at all levels. Sir John’s first interaction at COL happened over 20 years ago, when he chaired its planning committee. At that time, he was president of Canada’s Laurentian University. He went from there to lead the Open University in the UK, and then served as head of Education at UNESCO. Sir John’s colleague, Dr. Venkataraman Balaji, is Director of Technology and Knowledge Management, and led the efforts in crafting COL’s recent Open Educational Resources policy.

What were the primary motivations in developing an OER policy at COL? What hurdles (legal, social, cultural) did you have to overcome, both within the organization and among the member states?

We’re in the open business, so it made sense to communicate a formal open policy prominently on our website. It really wasn’t a problem, and there were few hurdles inside COL. We drafted the policy, it went through a few iterations within our staff, and then we adopted it. That said, we should be clear that we didn’t take this policy to the member states for review. We’re a small organization, and we do not have a general assembly of our membership. So, we didn’t have to wade through the politics of getting all the states to sign on. However, we didn’t develop the OER policy just pat ourselves on our back. We want to show the world that supporting open education is how we all should behave these days.

The work of intergovernmental organizations (IGOs) is very important, but to the outside observer it is sometimes not apparent what IGOs do. What does COL do to “encourage and support governments and institutions to establish supportive policy frameworks to introduce practices relating to OER”?

If I may be so bold, I think your question reflects an American bias. The United States and other large, powerful countries tend to operate bilaterally. Smaller countries prefer the facilitative, collaborative approach of working via intergovernmental organizations. UNESCO is the extreme example, where 193 countries operate democratically, and everyone’s voice is at least in principle equal. When I worked at UNESCO, I was surprised how seriously the member states took the recommendations that were developed. They trust that sort of process more than directives that come at them bilaterally.

In general, the IGO process aims to get countries to work together to do things they cannot do separately. One example is a virtual university for small states within the Commonwealth. Since two-thirds of the 54 member states are nations with populations of 2 million or less, they have fewer resources to spend on content creation. You can imagine when the dot com boom came along the small states were worried how they could come to terms with all the potential benefits (and address the challenges) of this rapidly changing digital, networked world. So their ministers of education looked at the challenge and said, “if we can’t crack it individually, why not crack it collectively?” COL helped them start a ‘virtual university’, which is not a new institution but a collaborative network where countries and institutions can work together to produce course materials as OER that they can all adapt and use. This virtual university has developed curriculum in various areas, such as a diploma in sustainable agriculture for small states. You can imagine that agricultural practices in a place like the atolls of the Maldives are very different than agriculture in the volcanic islands of Dominica. However, developing a vanilla version of the curriculum and then allowing each region to tailor the resources to the specifics of their own agricultural ecosystem has proved much more efficient than each state starting from scratch. A condition of participating in the virtual university is that anything you create must be released as OER.

Well, our policy simply says COL will release its own materials under the most feasible open license, which includes the Creative Commons Attribution Share-Alike license. We understand why MIT OCW adopted a noncommercial license for its materials—they were the first to do it and didn’t know what was going to happen. But now, we encourage people to not use noncommercial if they can avoid it, and we follow our own recommendation. It wasn’t until Dr. Balaji arrived that we were able to sort through the legal and technical challenges that COL, as an intergovernmental organization, faced in adopting an open license.

I’m exaggerating quite a bit here, but we’ve observed that in the north people are more focused on producing OER and that in the south people are more focused on how they can use OER. Just a few months ago I was at the Open Courseware Conference in Boston. Perhaps three-fourths of the presentations there focused on producing OER, while only a small number were about re-purposing and reusing OER content. This has to change for the OER movement to take off.

In the south, there’s a cautious attitude of “there’s lots of stuff available, why not use it?” We’ve been encouraging the north to take a more universal approach and think multidirectionally. This is why we’re delighted that a school like the University of Michigan is using OER from Malawi and Ghana in its medical programs. Why should the University of Michigan create OERs about tropical diseases when there are folks that live in the tropics that can do it better? So, we encourage people to see OER production and use as a multi-directional flow.

Can you discuss the goals and outcomes of the Taking OER beyond the OER community project, organized by COL and UNESCO. What’s next?

This project has a long history, and really goes back all the way to the origin of the term Open Educational Resources. But more recently, in 2009 UNESCO hosted a world conference on higher education. That event didn’t ruffle feathers in the north so much, but influenced thinking in the south. It reiterated the importance of open distance learning, ICTs, and particularly emphasized the global sharing of OER to expand quality higher education. COL picked up the work with UNESCO. We realized that unless there is a much wider appreciation of what OER is, it’s not going anywhere. And as the name of the project implies, our goal was to advocate to those outside of the already-established open education community. We held six face-to-face workshops in Africa and Asia. These were mainly aimed at university presidents, quality assurance groups, and those interested in open distance learning.

Last December we held a policy forum at UNESCO in Paris to pull these threads together. We decided there that it would be helpful to develop a set of OER guidelines targeted at key stakeholder groups. These included governments, higher education institutions, teacher and student groups, quality assurance agencies, and qualification bodies. We’ve been iterating on these guidelines since then, and they are now being distributed for wide consultation. In October of this year there will be another policy forum where the OER guidelines for higher education will be put into final form. We hope to unveil these recommendations at the UNESCO general conference in November alongside an OER platform UNESCO will also be launching at that time.

Over the winter, we wish to conduct a rather extensive survey of governments around the world to find out where they are on policies related to OER, open access, open formats, and other related topics. Surveying governments is not an easy task, especially when they don’t always understand the questions you are asking. But, if all goes well, those survey results will be pulled together, to the end of working toward an update to the Cape Town Open Education Declaration. There’s a desire for COL and UNESCO to mark the 10th anniversary of the launch of the term “Open Educational Resources” with a conference in June 2012 at which countries can sign an updated declaration.

What do you predict will be the impact of the COL OER policy, and what would you like to see come out of this? What can you recommend to other IGOs that are beginning to think about developing an open education policy?

My advice is to just do it and don’t get too fussed about the license at the beginning. We hope that our small organization, which seems to have an influence larger than its size, will be the grain of sand in the oyster for other IGOs. UNESCO is working to get on the right page; given their name it would seem peculiar if they are not more in the ‘open’ business. But I understand the problem with large organizations. When you look at UNESCO, you’ve got general assemblies with lots of people that don’t like things unless they’re invented there. For example, everyone in the world wants for there to be standardization in electrical sockets, as long as the standard that is adopted is the one they use. Those organizations interested in adopting an open policy should start small, and work their way through the problems as they go. If you try to make your entire back catalog available, you’ll be lost. Those big intergovernmental organizations should say, “from now on, we’re going to be as open as we can be.” An important thing is to adopt the philosophy of openness.

One thought on “Sir John Daniel of the Commonwealth of Learning: Open Education and Policy”